The XF was the last model developed by Jaguar before it was sold by Ford to Tata Industries in 2007, and in 2011, it received important updates under the new management.

While it was based on the former, and unsuccessful Jaguar S-Type, the XF was well received by the market due to its design and interior features. Some of them were carried over to the facelifted version, but others were lost on the way.

From the outside, the new headlights design matched the bodywork's shape. The non-facelifted version had to use a pair of headlamps which were intruding into the hood. It looked sleeked and the raked A-pillars and sloped back resembled a four-door coupe shape. The LED taillights were completely new.

Inside, the XF cought its audience due to the rotating vents and the rotary gear selector knob that was rising from the center console. The same system was kept, but the gearbox was new. The instrument cluster featured a color display between the tachometer and speedometer and a new infotainment touch-screen was integrated into the center stack. But some buttons were still carried-over from the former Ford models such as the Fiesta, or from Land Rover.

Jaguar unveiled the 2011 XF with a new, 2.2-liter engine. It was the same unit used on the Land Rover Freelander and it was the result of a joint-effort between Ford and PSA (Peugeot-Citroen group). The new, 190 hp unit was the promise to increase the fuel-efficiency. The 8-speed automatic transmission was new as well. Another important update was the new 5.0-liter Jaguar V8 gasoline engine with variable timing. It produced almost the same amount of power as the previous, supercharged unit. 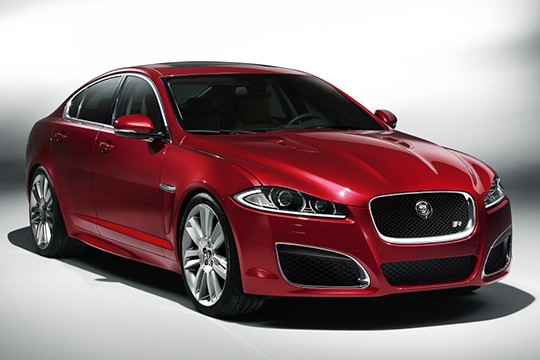