A newcomer to the luxury crossover market, the Jaguar F-Pace made a strong entrance in 2015 with its first generation of F-Pace.

The second generation was unveiled to the public in 2017 and was the winner of the 2017 World Car of the Year and World Car Design of the Year Awards at the New York International Auto Show. With such great success, Jaguar decided to design a special version of the F-Pace, the SVR.

With the SVR treatment, the F-Pace became the fastest SUV in Jaguar’s lineup. Engineered by the Special Vehicle Operations, the Jaguar F-Pace SVR was by 44% more powerful, featuring a supercharged 5.0-liter V8 engine that produced 550 hp and 680 Nm.

To improve aerodynamics, the exterior design was updates with larger air intakes, side fender vents to lower the pressure in the wheelarches, unique wheel arch extensions and lower body mouldings. The front hood was created especially for the SVR and featured vents designed to extract the hot air from the engine bay.

The rear was also refreshed with a unique spoiler and a new bumper, as well as quad tailpipes.

The SVR featured a stiffened chassis and an anti-roll bar to reduced body roll as much as possible.

Fit for all weather conditions, the F-Pace SVR featured top-notch technologies such as Adaptive Surface Response, All Surface Progress Control, an all-wheel-drive system and others, making sure to perform at its best. 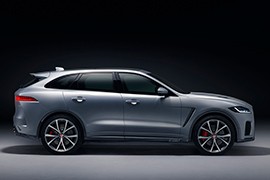