Tesla's FSD Beta is out on the street and there's nothing you can do about it. Fortunately, not every Tesla driver has access to the system and, after several of those selected tried the new version out, it also seems it's been massively improved.
6 photos

As you probably know, the fact the FSD Beta works well is both good and bad news. It's good because it shows progress, it shows we (or at least Tesla) are getting closer to the moment our cars will do most of the driving for us, and it seems like a large portion of the population finds that though appealing.

On the other hand, though, it's bad because that means a lot of the so-called "testers" will start to rely on the system too heavily, and even though it's better than before in so many ways, it's far from being perfect. It's not even on the same planet, that's how far it is. However, it's easy to forget that after a few successful trips, so these people might get complacent. That's when disaster can strike.

Tesla does inform everyone who's part of the FSD Beta testing fleet to pay even more attention than usual (what does that even mean?) while using the feature, stressing it can do "the wrong thing at the worst possible moment," but it can't hide the fact it uses its customers as test drivers for a technology that's not available to the wide public yet.

Well, just in case anyone needed proof of how quickly an "autonomous" trip in a Tesla running on Autopilot FSD Beta can turn sour, have a look at this clip. A group of people sat in the white Model 3 picking random spots on the map for the Autopilot to navigate to. They also had a Skydio 2 drone with them to provide a completely new angle for these FSD Beta videos we've been swamped with lately.

Skydio says its drones use "the most advanced flying AI on the planet," which essentially makes them the airborne equivalent of Teslas. Well, if this were a contest, then Skydio would be leading 1-0 since the drone managed to navigate between cables and trees without hitting anything, while the Tesla only needed one and a half minutes to head straight for the rear of a red Ford sedan parked on the side of the road.

The clip goes on for seven more minutes, and the Autopilot provides a few other tense moments, but none as obvious as this one. There is at least one more left turn that goes less than ideal and a few occasions where the Model 3 gets way too close for comfort to other parked cars (to the point where all ultrasound sensors show red, which makes it even more difficult to understand why it does that since the AI is definitely aware of the obstacle. Maybe it just likes to mess around with humans).

Whether you haven't seen any Autopilot FSD Beta video so far or you're sick of them, we recommend you watch this one. It manages to capture both sides (bad and good) of what the system is currently capable of and, thanks to that Skydio 2 drone, it offers plenty of beautiful shots of the Model 3 cruising down the streets of Auburn, California. 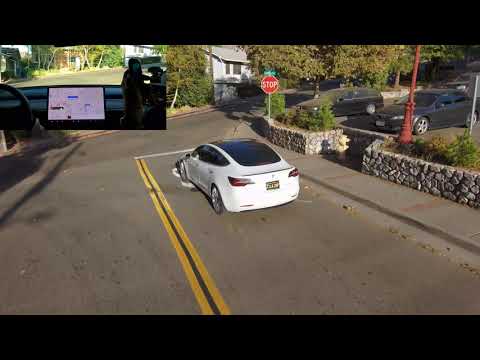