2 F1 Mexican Grand Prix Is Up Next, Leclerc Barely Ahead of Perez in the Standings

3 Lewis Hamilton "Sorry" He Couldn't Win the U.S. GP, But It's "Always Fun to Battle Vettel"

Monica Coman
Seven-time Formula One World Champion Lewis Hamilton may race for a living, but he doesn’t really like driving. Well, unless he’s going really fast, that is. And, despite his $10 million+ car collection, he says he drives a Mini Cooper.
6 photos

Sir Lewis Hamilton has just stopped by Jimmy Kimmel Live ahead of the Mexican Grand Prix. One of the things he talked about was, naturally, driving, but moreover, how he doesn’t really like doing it on a daily basis. It all started with Kimmel asking him if he drove himself to the show, to which he said: “I don't like to drive. I actually don't really like driving, unless I'm going fast." He admitted that he's a really good passenger, though, and that the only time he drives is if he goes to visit his parents. Plus, he added that his father, Anthony, "loves cars and he loves driving."

When it comes to him, though, "I'd rather hand my keys to my friends or something. I don't like traffic, it’s more stressful for me." He said that he does have "an old Mini Cooper like the Mr. Bean car" at home and that he usually drives it back to the town where he grew up, in the UK.

Hamilton also admitted having issues switching from the left side to the right side of the road whenever he's going from L.A. to the UK, admitting that "I think we have it wrong if I'm really honest." Despite growing up in the UK, he said that "when I get home, I don't know which side of the road I'm supposed to be on. I get on the road, I'm always on the wrong side initially and I think they have it wrong."

This isn’t the first time Lewis Hamilton made this revelation about his driving preferences. A few months ago, he admitted to Vanity Fair that he finds driving “too stressful,” and tries to avoid it.

Despite all that, he has acquired quite a collection over the years, which is estimated at over $10 million. That includes two Shelby Cobras (both original, each worth around $2 million,), a $1.2 million McLaren P1, a $2 million Ferrari LaFerrari, a $4 million Ferrari Aperta, and several Mercedes-AMG cars. 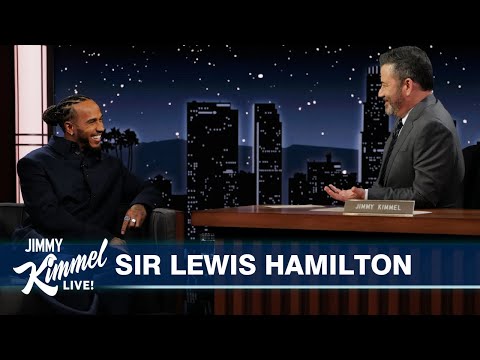