It has been over a decade now since I've been seeing all sorts of crazy builds coming out of the United Kingdom, and more specifically from Birmingham, where DriftWorks was created. The man behind DW, Phil Morisson, is more passionate about fast cars than most people, and he always comes out with the most insane ideas for his new projects.
11 photos

I've lost track of how many Driftworks built projects I've dreamed about driving at least once. The first one that had me hooked was the 1JZ-swapped Nissan R32, which was one of their drift weapons back in the day. Then he made the internet go crazy over his V10-swapped BMW M3 E46, which sounded more like a nuclear warning siren than a regular car.

Phil brought a serious contribution to the world of drifting over the years, and in 2012 he added to those efforts by releasing a feature film called "Outsiders". It was then that he and a couple of his friends traveled to Japan to create a stunning visual documentary on what drifting is all about in the Land of the Rising Sun.

Wanting to do something else than just JZ-swaps, he then went on to build a NASCAR-powered Toyota Corolla AE86, which we also recently featured. After drifting that for a few years, he once again flew to Japan, only to come back with an old-school, RWB tuned flame-spitting Porsche turbo.

As you may be aware, there are other interesting builds in his garage, but one of the most anticipated ones was this 2006 Lamborghini Murcielago LP640. As Phil mentions: "This car has been a long time in the making". This LP640 is inspired by the old FIA GT1 class of the past, where Murcielagos alongside other eardrum-shattering V12 godlike machines could still roam the racetracks in pursuit of some higher form of enlightenment.

Phil simply refers to this car as "the daftest build I’ve ever done", and it's not difficult to understand why! The build started in 2012, and the story has been reported on closely by Phil and the staff at Driftworks. So it comes as no shock that this car is already breaking the internet wherever it is being posted or discussed.

The list of mods is too ridiculous to even go through, but there are a few things you might be interested in knowing. This used to be an E-Gear Lamborghini, but when you're as serious about race cars as Phil as, that was not enough, and he opted for a 6-speed manual gearbox swap!

Also, you might know that the Murcielago came with all-wheel drive from the factory, but given Phil's desire to get as close to the R-GT version as possible, he had his car converted to RWD as well. Seeing that reportedly only 9 R-GT Murcielagos were ever built, that would make Phil the owner of the 10th one in existence!

His soon-to-be street-driven Murcielago GT1 is also closely related to the race car, as it uses R-GT GT1 Manifolds and headers, and a custom ITB intake has also been brought in, to ensure that this is going to sound even more menacing than the V10 BMW M3 ever did. The way the car looks right now, with all the GT1 bodywork, is extremely impressive, especially if you consider it took 14 months in total to achieve. Now we can only wait to see it being driven hard! 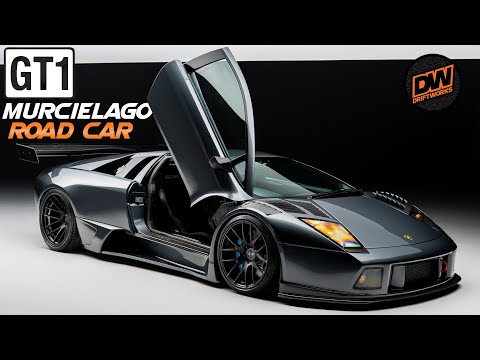