Even for the most affluent residents of Hong Kong, this must have been a most arresting sight: no less than 45 supercars and some sports cars were pulled over at the same time on Sunday morning.
1 photo
The reason for this en-masse traffic stop was, of course, illegal racing and speeding. Police have dubbed the operation “Fossington,” and knew in advance that a parade of some sorts would be organized on the Island Easter Corridor expressway in the early hours of the morning, the South China Morning Post informs.

On this particular expressway, the speed limit is 70 kph (43.5 mph), but residents in the area have been complaining that it’s mostly there to ignore. Racing and all manners of street events take place at the weekend, especially in the earlier hours, when traffic is scant.

With operation Fossington underway, police pulled over all 45 vehicles on Gloucester Road, Wan Chai. Passers-by were quick to record this quite rare occurrence of having so many Lamborghinis, Ferraris, and Porsches being ticketed all at once, with footage instantly going viral on social media. You can see a sample of what was shared online in the video at the bottom of the page.

“Officers found a number of cars were driving westbound at a high speed along the Island Eastern Corridor expressway. Subsequently, officers intercepted 45 private cars on Gloucester Road off the old Wan Chai police station,” police said in a statement to the media outlet.

No arrests were made, and it looks like all drivers drove home with fines, for what it’s worth. A Nissan GT-R was towed away on suspicion that it had illegal modifications, and nine other vehicles were issued defection orders and will have to undergo inspection to get back on the road. Once all the paperwork was completed, everyone got to go home.

Until that happened, though, they did make for a striking visual. 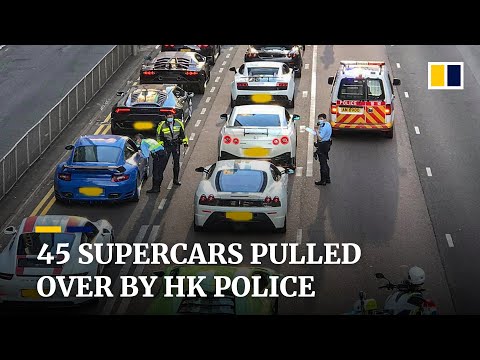