3 The First Electric SEAT Will Be the "Marbella" Baby Crossover

5 SEAT Ateca Cupra SUV with 300 HP Under Development, Concept in Paris
Up Next

Mihnea Radu
The SEAT Tarraco, the brand's new 7-seat SUV, outperformed the Mercedes G-Class during Euro NCAP crash tests, which means it's very safe. However, during the independent "moose tests" carried out by km77, it behaved quite strangely.
1 photo
The first attempt they do is always at 77km/h, as the name of the publication's name implies. Without knowing how the car might react to sudden changes in direction, this could be dangerous. The Tarraco does not exhibit any dangerous handling characteristics (as in falling over), but it almost comes to a complete stop.

Electronic stability control intervenes, grabbing at the brakes to slow the vehicle, and by the time SEAT enters the last set of cones, it's doing only 15 km/h. So you could say that it comes to a complete stop without any braking intervention from the driver.

Is that bad? Yes. You have to consider that the moose test is designed to simulate avoiding an obstacle in your lane by quickly jumping in and out of the opposite lane. Eventually, the driver figured out that by doing 74 km/h and putting in smaller, less abrupt steering inputs, the Tarraco would maintain 40 km/h by the last set of cones.

Similar results were achieved in the slalom course. It was impossible for the driver to pass all the cones at 75 km/h. He also noted that the result was the same in both Sport and Comfort modes, despite the adaptive suspension system. The only difference was that in Sport, the steering was harder to use. The ESP system would always drag away all the speed if it sensed excessive input from the driver to ensure the heaviest of SEAT models doesn't roll over.

The Tarraco is a 5+2 crossover, based around the VW Tiguan Allspace and Skoda Kodiaq. We think it looks very handsome with its understated LED lights and color choices. The engines are the same too, with most people opting for a 150 HP 2-liter diesel like the one in this test. 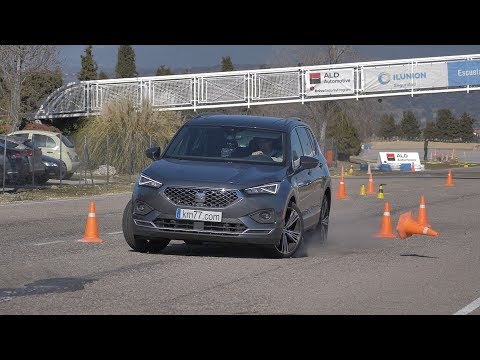