SEAT's introduced the fifth generation of the Ibiza at the 2017 Geneva Motor Show on the same platform as the Volkswagen Polo.

Luca de Meo, the SEAT's president, tried to improve the Spanish brand image on the market and get more attention from customers looking for a more emotional design vehicle. SEAT was the only brand that featured a Latin-inspired design over a German technical platform.

The Ibiza looked like a shrunk SEAT Leon, the compact-segment contender of the Spanish brand from the outside. Its angular headlights, sculptured door-panels, and aggressive look were the main ingredients for the small-segment hatchback. Unlike its predecessors, it was available only as a 5-door version. SEAT dropped the formerly used station-wagons and three-door versions.

Inside, the carmaker succeeded in building a roomier cabin, thanks to the increase in front and rear tracks and the wheelbase. The result was more legroom for the rear passengers, which was more than welcome for a small-class vehicle. Its split-folding rear seats could have expanded the 355 liters (12.5 cu-ft) trunk up to 823 liters (29 cu-ft).

Under the hood, SEAT installed only Euro 6 engines ranged between 65 hp and 150 hp. Depending on the version, the engineers paired them to a five or six-speed manual transmission. For selected versions, a 7-speed automatic (dual-clutch) gearbox was available as an option. 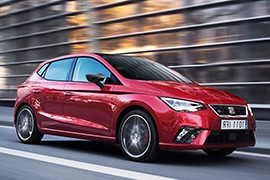