These days the famed bicycle has been taken to new heights. Yes, I'm talking about e-bikes, but with the inflated prices that some units can carry, it's no wonder we see the appearance of e-bike conversion kits, and one such kit is the Rubbee X.

Folks, if the name Rubbee sounds familiar, it's because this crew has actually been around since 2013, when they first unveiled their own idea of what an e-bike conversion kit is and how it's meant to perform. While the first versions of this Lithuanian product may have not been the strongest or most stylish, what sets Rubbee apart from other e-bike kits is how this works. Let's dive right in and see how easily you can electrify your bicycle journeys.

Kicking things off, I want to point out just how much Rubbee will cost you; no more than €580 ($620 at current exchange rates). That's it. That's all you really need to get into the e-bike game. Sounds too good to be true? Maybe it is, maybe it isn't; you should decide once you've gotten all the facts.

Now, I've mentioned that Rubbee is a bit different from other kits you may have seen. Why? Well, it's a self-contained unit that requires no complicated mounting, nor do you have to take your bike apart to get things moving; the X simply mounts to the bike's seat tube and applies pressure onto the rear tire. That's friggin it! Just mount a bracket to the seat post and install your X.

So, we know that this sucker is easy to mount and won't rip a hole in your pocket, but what else? Well, one thing I found rather neat about the X is its ability to adapt to an array of bicycles. From 16-inch to 29-inch tires, all are applicable for the Rubbee, and so are tire cross sections from 0.5 inches up to 2.50 inches. Best of all, it's suitable for any frame on the market, even a full-suspension bike; if it has a seat tube, Rubbee can do it.

Once you've mounted the bracket onto your seat tube and clicked the X in place, lower it onto the tire ad watch the magic happen. Instead of being mounted directly into your bike's hub or BB bracket, the Rubbee is simply set onto the tire, upon which it will proceed to spin following the assistance level you've chosen. However, the amount of power your X can put out depends on the number of battery modules you have inside.

As a base model, only one module or pack is available, and it's enough for a top speed of 16 mph (25.7 kph) with 250 watts of power being pushed out. With three modules, the maximum allowed, you can hit 20 mph (32 kph) speeds, crank out 350 watts of power, and it is applicable even for off-road use. However, with three modules, a range of 30 miles (48 kilometers) is your limit. For two, it's 20 miles (32 kilometers), and for one module, your range is a mere 10 miles (16 kilometers). But, at least charging only takes up to one hour per battery pack.

Yet, this is not the end of this story. To help get some energy back into your battery packs, the Rubbee is equipped with regenerative braking and one that allows you to set the strength limit. With the gear's proprietary anti-slip control and suppression system, this baby will work even if your tires are wet, even if covered with snow.

All that's left to do now is give ol' Rubbee an e-mail to see if I can get my hands on an X myself; I'm dying to test this thing's limits and see what 10 years of R&D can lead to. Wish me luck! 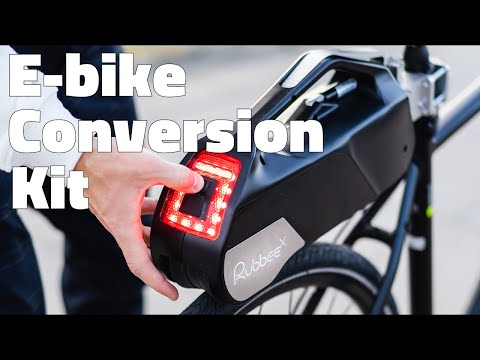 Editor's note: This article was not sponsored or supported by a third-party. Images in the gallery feature multiple generations of Rubbee conversion kits