3 Is Audi Lying About the Performance of the 2022 RS 3 Sedan? Spoiler Alert: YEP!

4 Electric vs ICE: Ken Block Tries Them Both

It is a well-known fact that our sense of smell plays an important role when choosing to engage in a romantic relationship with someone. Similarly, some people choose their cars based on sound: rotaries, V8s, and flat-six engines; they all sound different. And they all have their appeal. And if you were to compile a list of the greatest sounding engines of all time, surely you wouldn't forget to include Audi's turbocharged inline-five.

The first-ever Audi inline-five engine was revealed back in 1976. It was a 2.1-liter unit meant to go under the hood of the Audi 100. But if you ever felt like you've fallen in love with this engine, it most likely happened by looking at a different car.

Audi's combination of a strong, turbocharged inline-five and their Quattro all-wheel-drive system proved to be almost unbeatable throughout the '80s. Be it that you'll look at Group B or IMSA GTO videos, you'll be constantly bombarded by Audi's exhaust notes and turbo flutters.

Today's road-going inline-five engines produced by Audi don't sound nearly as exciting. And that makes sense with all the ongoing regulations for mass-production vehicles. But with the way technology has evolved, that doesn't mean that the performance isn't there.

And today's drag race aims at revealing the difference between a 1985 Audi race car and a 2022 sports car from the same manufacturer. Both cars are using turbocharged, inline-five engines. And both cars have the benefit of an AWD system.

The RS 3 also happens to be a lot cheaper than its opponent, with a starting price of $58,900 before tax ($1,095 destination charge). Looking over at the '80s race car, this used to be driven by Walter Rohrl and even Stig Blomqvist.

While you might be able to buy a replica of this car for about $300,000, this particular vehicle is insured for over $2 million. With all that in mind, there's no way a stock RS 3 can win this challenge.

Even so, it doesn't hurt to try. With its fancy launch control, the RS 3 lunges ahead for the first run of the day. It doesn't take long for the tables to turn, even though the Sport Quattro S1 is losing time with every gear change.

In case you've never seen a car like this tackling the quarter-mile (402 meters), you'll be happy to know it needs 11.8 seconds to cross the finish line. The RS 3 was only 0.2 seconds slower, which is frankly quite impressive. You can imagine that even after a light tune, it's probably going to outrun the race car.

Up next, we get to see a rolling race. But with no more launch control, the RS 3 is likely going to be gapped even worse than before. They are neck and neck by the time they reach 90 mph (144 kph), but the Sport Quattro S1 once again takes the lead soon after.

The result is the same for both runs, as the RS 3 is beaten to the half-mile (804 meters) with no right of appeal. That means there's only one test left. Even though the race car is a lot lighter, its older tires and the lack of ABS prove to be detrimental to its stopping power. 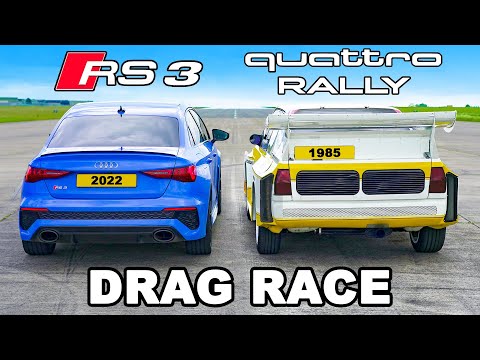