2 Widebody Ferrari F355 Shooting Brake Is Not Your Typical Berlinetta

Out of all the tales talking about the motoring titan that Enzo Ferrari was, some of which are closer to the truth than others, few have spread further than the one revolving around Il Commendatore's genuine bias towards racecars. The garage that was the heart of the Prancing Horse's founder only had room for motorsport machines, with the Italian having to add road car activities to sustain his chequered flag adventures. But what if we were to talk about a different breed of Ferrari racing machines, namely drift cars?

Ferrari sideways instruments started becoming a thing last decade (more on this below), but the most recent contraption of the sort seems to have climbed all the way to the top of the outrage ladder and then some.

I'm referring to the Wankel-swapped 456 we discussed earlier this month. Built by a Kiwi aficionado called Reuben Bemrose, the machine seems to have enjoyed its maiden voyage hooning over the past weekend.

An, as you'll notice in some of the photos in the gallery above (Facebook sources mentioned over there), the Mazda 13B engine that now animates the no-longer-a-Grand-Tourer was cast in the role of a dragon, spitting fire like crazy during a rather successful burnout attempt.

And while purists are shocked by the sheer sentence including the names "Ferrari" and "Wankel", many rotary engine lovers are also surprised: this is a 13B, a two-rotor, naturally-aspirated engine with a limited output - to produce the kind of muscle a tire-smoking ride of this sort normally delivers, the builder would need to add some rotors, a turbocharger... or even both.

Then again, the gear head shouldn't have too much trouble doing that. After all, he does own a label called R's Garage, which has figured things out so far, including the installation of a sequential tranny. In fact, the straight-cut gears will please your ears thanks to the short clip below:

Having a blast, can’t believe it all came together!


Oh, and at least from what can be seen in the few photos/vids that have surfaced to date, the Mazda-powered 456 is still missing a key ingredient for a drift car, namely the extra-wide-angle steering system. It does pack a Nissan Silvia (S15) dashboard, though.

There's no reason to fret, though, since the project is still in its infancy, while many other hardware bits demanded by the slip angle label are already in place: I'll list the hydraulic handbrake and the engine compartment protection cage as examples.

 Everyone’s worked so hard for this very moment.


Now, as the emotions generated by this brap-brap 'Rarri continue to boil, let's take a bit of time to talk about other Ferrari drift cars that came before it (while the links to each of their stories await you below, there are also pics of all the projects in the gallery above).

Builders seem to use a non-discrimination policy when it comes to choosing their Maranello starting points. As such, both V8 and V12 models are used for sliding machine transformation purposes, even though the first seem to dominate this in-the-making genre.

And since we're currently walking down V12 avenue, I'll mention this sort of drift conversions involve at least a Ferrari 599 and a 550.

We'll start with Daigo Saito's 599, which appeared to maintain its twelve-cylinder heart. We talked about the toy in August 2016: this was expected to form a mega-duo together with the Japanese pro drifter's Lamborghini Murcielago, but the project never appeared to reach completion.

In fact, this 599 sideways project could have ended up in the hands of Federico Sceriffo. We went over the Italian sideways athlete's ride in July 2017 and while it did pack a V12, the engine had traded its natural aspiration for a pair of belt-driven turbos.

Speaking of possible evolutions, this Swedish-build Ferrari 550 drift car surfaced back in December 2010. And, as mind-bending as such a project sounded, BMW V8 + forced induction included, this never appeared to have reached its racing form. So perhaps the beast lived on to become Yoichi Imamura's R35 Nissan GT-R-powered 550. 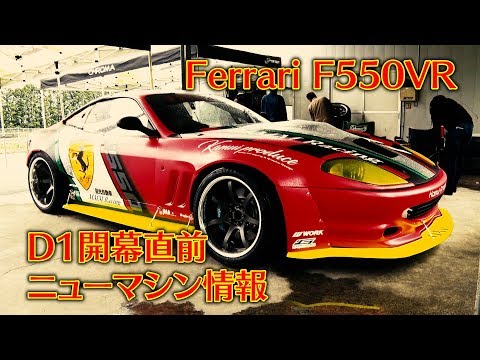 We never got to talk about this one, but if the name of the Japanese pro drifter behind its wheel sounds familiar, that must be thanks to his NASCAR V8-motivated Lexus LFA drift car. Heck, here's a video of the Ferrari doing its thing in June last year.

Switching to the V8 camp, back in June 2017, we were all surprised by a Ferrari 360 drift car from Japan, whose appearance was on the wild side, Liberty Walk widebody, rusty finish and all. And, to once again mention possible evolutions, this could be a further stage of the 360 Modena that was seen sliding at Ebisu back in October 2015.

The final part of this Ferrari drift car story is quite unlike the others. To be more precise, this is about the N/A vee-eight heart of a Ferrari 458, which landed in the nose of a Toyota 86 sliding tool.

Pro drifter Ryan Tuerck, the operator of the resulting GT4586, did go through his ups and downs with the machine. Fortunately, the vehicle was fixed following the ka-bang described behind the link. So, as is the case with the other Italian goodies described above, this continues to fulfill its role of abruptly turning tires into smiles.

PS: Admittedly, none of us here at autoevolution knows how to bake a cake. And since today would've marked Enzo Ferrari's 122 birthday, we came up with a series of cover stories like the one you just finished reading. In fact, we've prepared an entire eye candy bar for you, since February is our Ferrari Month.