1 The Hydrosphere Proposes a Novel, Luxurious Way to Explore the Underwater World

5 This $30 Million Floating Villa Is an Endless Holiday, Wherever You Want It
Car video reviews:
Coverstory

Conceptual art may have gotten out of hand, especially in our field of interest. Designers with varying degrees of experience and skill are constantly churning out concepts for cars, bikes, bicycles, campers, yachts, flying cars (pardon, eVTOLs) to the point where anyone would be excused if they lost interest.

But conceptual art does serve a purpose. When done right, with the right people and the right intentions, it highlights future trends or possible directions, functioning as a virtual study for naval design. The A Group’s latest, Project Comète, is a good example in this sense.

The A Group was established in 1985 by Oceanco co-founder Richard Hein and is now being spearheaded by Matt Pegrum. Thibaud Le Merdy, on the other hand, is an up-and-coming yacht designer: in 2017, he was named Young Designer of the Year by trade publication Boat International.

When the A Group and Le Merdy got together, Project Comète came to be. Superyachts.com notes that, in reality, Le Merdy had an idea for this particular superyacht as early as 2017, but the collaboration with the designer company really allowed him to bring it home. And what a beauty it is!

Project Comète is a 272-foot (83-meter) superyacht designed to blur all boundaries between the outside and interior spaces. The superstructure blends into the hull for a most elegant silhouette with flowing, uninterrupted lines. Of course, elegant yachts have been done before—in real life, too. What helps this one stand apart is this declared intention to achieve near-complete openness.

Nowhere on the vessel is that more apparent than in the sheltered, bow-facing dining saloon that, from the side, resembles a gaping hole smack in the middle of the superstructure. That alone would make for a striking visual, but up close, this saloon is even more impressive, as it’s located underneath the pool on the main deck, which is glass-bottomed. A water installation right under the pool makes it look as if the pool and saloon are permanently connected.

The generous 1,800GT interior space is perceived as even more generous because designers strove to bring the outside in. Project Comète is a gorgeous mix of glass and bronze (see-through and reflective surfaces), which helps create the impression of utmost luxury and maximize the impression of space.

The beach club at the stern is a good example of that: next to the staircase are two alcove-like areas sheltered from the elements that provide privacy in a space otherwise meant for socializing. In fact, all areas onboard this massive, ultra-elegant superyacht are designed with socializing in mind.

Amenities include the glass-bottom pool and two separate jacuzzis, a private deck for the owner, a spa, several dining areas, and a garage that holds plenty of toys. Accommodation is for 12 guests in seven staterooms and 22 crew, and the guests would clearly not lack for entertainment on the water: the oversize garage can hold two 33-foot (10-meter) tenders, one 23-foot (7-meter) tender for the crew, and eight Jet Skis.

The A Group imagines Project Comète would, one day, use hydrogen fuel cells so as to guarantee zero-emissions travels for its multi-millionaire but, at this point, still-hypothetical owner. Until then, it would use standard propulsion, with a top speed of 16 knots and a cruising speed of 12 knots.

Project Comète was not built on commission or with a specific owner in mind, but rather to showcase a gorgeous silhouette achieved “without compromise,” and “the perfect balance between spaces open to the surrounding nature and refined, clean forms.” That said, should the right owner come along, he or she would be “willing to breathe fresh air and be close to the sea at every moment.” And wealthy, but that goes without saying. 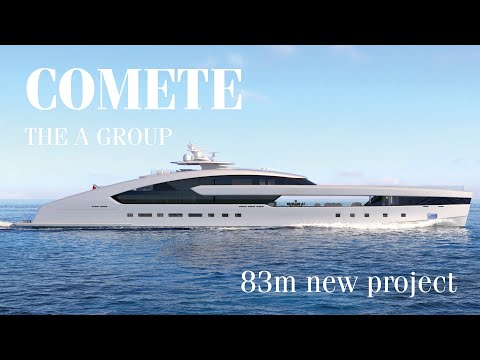