The Porsche versus Mercedes-AMG argument is quickly turning into a very interesting story to follow. Moving on from the racetrack to the streets, this is good news for petrolheads worldwide. Because competition leads to further development, and this way both manufacturers will have to strive for perfection with each new generation.
6 photos

Just a few days ago we got to witness an AMG GT Black Series hitting 196 mph (315 kph) on the Autobahn. In that video, we also witnessed a menacing Porsche coming out to play, and it seemed to be even faster than the Mercedes-AMG. With today's video, we have further confirmation of how it all went down. We're looking at the same Porsche, a 911 GT2 RS 991 to be more specific. And this is no stock unit, as it has been fiddled with by the people over at LCE Tuning.

Sure, there's no arguing over the fact that the Carrera GT is the best sounding Porsche of all times, but the 911 GT2 RS is just as insane on so many different levels. The reviewer states that this one is packing 800 horsepower and over 664 lb-ft (900 Nm) of torque. But I've had a look at the tuner's website, and it looks like this may be even faster than that. The 820 horsepower package includes tuning the ECU and a sport exhaust system and has a price tag of just under 8,000 Euro.

The company also has a package for 900 horsepower and 700 lb-ft (950 Nm) of torque, and I'm sure that they can concoct something even more impressive for anyone looking to go beyond those figures. But action speaks louder than words, and I was curious to see how fast this 911 GT2 RS was capable of going down the Autobahn. Using the Dragy app, we get to see several measurements that reveal the true potential of this beast.

But if you want to skip straight to the interesting part, you should start at 1:58 in the video, as that's where we get to see the full power of this car being unleashed. It all starts at 52 mph (84 kph), and it takes less than 20 seconds for the Porsche 911 GT2 RS to get up to 186 mph (300 kph). As the driver changes to 7th gear, we get to see this monstrosity hitting 216 mph (349 kph), and somehow I get the feeling that with more mods this can do even better.

Of course, you're going to need access to the Autobahn, or a large testing facility to enjoy those speeds, but that should be the least of your worries if you can afford a car like this. 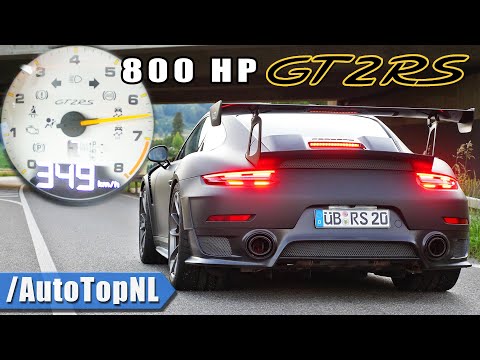