1 Ultra2 Megayacht Has Its Own Safe Room, Is a Floating Fortress for Billionaires

5 Era 80 Proves Explorer Yachts Don’t Have to Be Boring or Less Luxurious
Car video reviews:
Up Next

It should have been the summer's blockbuster, yet Christopher Nolan’s TENET became just another movie-victim of the ongoing health crisis. But it still deserves plenty of attention.

On Board Planet Nine, the Superyacht Explorer That Stars in Chris Nolan’s TENET

2020 has been terrible for the movie industry, particularly for those movie studios and directors (like Nolan himself) who rely heavily on theatrical releases. When you have so many rules and regulations, and especially such high risks associated with putting dozens of people together in the same room, you really can’t give a movie a theatrical release. Nolan tried with TENET, but it understandably fizzled.

The big conversation right now is around Warner Bros.’ decision to bring many of the movies scheduled for 2021 to HBO Max, in addition to giving them limited theatrical release. Nolan is fuming mad, calling it the worst decision ever in the history of filmmaking – Nolan being a very particular guy when it comes to making movies.

His particularities include shooting on celluloid and on 65 or 70mm, which makes his films perfect for the IMAX format. They also include a refusal to use CGI and reliance on practical stunts, which brings us to Planet Nine, the awesome luxury explorer he rented out for the production.

TENET was made on a budget of $200 million before marketing, and a chunk of it went to renting Planet Nine, the lair of the villain – Kenneth Branagh’s Andrei Sator. Most of the scenes in the movie were shot with the superyacht anchored off Ravello on Italy’s picturesque Amalfi Coast, with The Robb Report saying that the ship’s crew were on hand to move furniture and ensure no damage was done to the vessel. Nolan also employed a 4-man crew specifically for this purpose, i.e., making sure neither the interior nor the exterior was damaged during production.

Nathan Crowley, the movie’s production designer, put a rocket launcher on the back of the superyacht to make it appear more intimidating on screen and thus better match Sator’s personality. Otherwise, though, Planet Nine was unchanged.

Believed to belong to billionaire Nathaniel Rothschild, 240-foot (73.2-meter) Planet Nine was built by Admiral Yachts in 2018. It was one of the first luxury/superyacht explorers, long before they became norm, so it’s a perfect combination of sturdiness and high performance with the utmost luxury. To put it simply, it’s as luxurious and fancy on the inside as it’s rugged and badass-looking on the outside.

Currently listed for sale with Fraser Yachts for $103 million (or charter for $850,000 a week plus expenses), Planet Nine was designed to withstand harsh conditions. It is Lloyd’s Register Ice Class 1D, which, in conjunction with its 6,000 nautical mile range means it’s just the vessel you need to go wherever you want.

Accommodation on board is for 16 guests in eight very well appointed staterooms (including the owner’s suite, which has its own private terrace) and 22 crew in separate quarters. Amenities include a private cinema, spa and gym, a chef’s kitchen, and ample relaxation areas that offer dual functionality, both for cold and hot weather. There’s also a pool and a jacuzzi, and a generous beach club at the back.

A guest elevator travels across all levels, and there’s a separate lift for crew. The helideck has its own enclosed hangar and refueling station, as one has come to expect from most superyacht explorers. Planet Nine’s bird of choice is an MD Explorer 902.

According to executive producer Thomas Hayslip, the most challenging scene to shoot on Planet Nine stemmed from the decision to replace the vessel’s helicopter with a more menacing and heavier Russian-made Mil mi-8 twin-turbine helicopter. They basically had to figure a way to land the chopper on the superyacht without it actually touching down.

“Thankfully we were able to find a great crew out of Eastern Europe that does search and rescue,” Hayslip says. “They brought the helicopter in and just barely hovered, so it looks like the wheels are on the yacht. They weren’t. It was basically the thickness of a piece of paper, they were that precise.”

Planet Nine is powered by twin Caterpillar engines with 1,800 hp each and travels at top speeds of 16 knots – and a leisurely cruising speed of 14 knots. So, you know, if you have $103 million and some change to spare, maybe it’s just the superyacht for you. 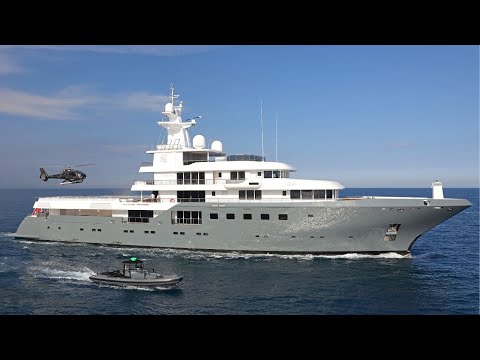