5 1993 Land Rover Defender 130 Customized Spectre-Style Is Up for Grabs
Car video reviews:
Up Next

Land Rover must have known that launching a new Defender is going to ignite a lot of controversies given how the old model had such a devoted following, and yet the British company took its chances and released this 2020 model that we've all become used to by now.
8 photos

As expected, the reactions were mixed. On the one hand, you have the people who can separate the new SUV from the model's history because they understand that something remotely close to what made the classic Defender great simply could not float in today's market. There are just too many restrictions and constraints in place regarding emissions and safety, with some of them responsible for taking the old Defender out of the picture in the first place.

On the other hand, you have the diehard fans who still haven't gotten over the fact the car they loved so much is no more, so they desperately want this new impostor to fail. And since they can't really pick on anything, they will cry about how much more expensive it is and how you won't be able to take it for a year through the African wilderness because you'll need a Land Rover service appointment if it breaks down.

Both sides have solid arguments, though in the end you have to side with the first group. Surely, sticking to the African explorer-type pool of clients would have been a bad business decision for Land Rover, whereas the new Defender opens up the brand to a much wider specter of customers by meeting the needs of both soccer moms and off-road enthusiasts.

Naturally, the two sides can't be reconciled that easily, so the debate over which one is better - the old or the new - will rage on for a little more. Carwow's Mat Watson decided to do his bit to put an end to it, so he brought the two SUVs for a head-to-head challenge over an off-road course.

We're torn between discussing the result and keeping the suspense, so we'll try to remain ambiguous and only say this: the new Defender just has this uncanny ability to make things so incredibly easier. Not everyone is going to become an instant off-road expert, but they will at least become decent. Case in point: Mat Watson. 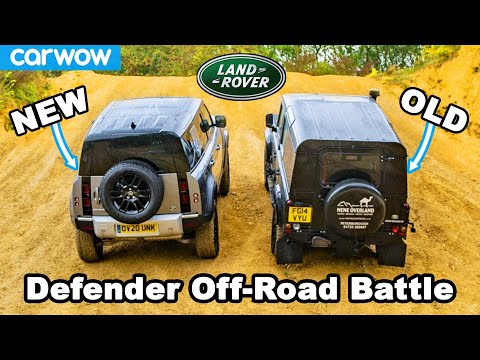 Editor's note: Yes, the whole clip does smell of paid promotion, but that doesn't mean the result has been influenced in any way