4 “Everybody Gets a Car!” Chinese Edition Sees 4,116 Happy Employees With New Cars

Nico Rosberg Tries the VW ID.R on the Nurburgring: "It's Claustrophobic"

Check the Wikipedia page for the quickest Nürburgring laps, and you'll notice the Volkswagen ID.R occupies a very honorable second in the "non-series/non-road-legal" section behind only the Porsche 919 Hybrid EVO race car.
12 photos

The ID.R, however, is the quickest electric car around the famous German circuit, beating the previous holder - the NIO EP9 - by no fewer than 40 seconds. It also holds the overall record at the Pikes Peak Hill Climb, as well as the Goodwood Festival of Speed hill climb where it managed to beat former Formula One driver Nick Heidfeld in a McLaren MP4/13 F1 car.

In each of these occasions, the ID.R was driven by Romain Dumas, a French driver who might have flown under the radar for you if you're not into endurance racing, but who is actually one of the discipline's biggest legends having won everything there is to be won, including the famous 24 Hours of Le Mans. Twice.

On the day of this video, though, Romain is there only to make Nico Rosberg's experience with Volkswagen's electric performance car as enjoyable (and safe) as possible. Even though he's talking to a former Formula One Champion, you get the feeling Romain is a bit every one of us whenever we have to give the key to our car to somebody else. He trusts Nico, but he doesn't trust him as much as he trusts himself.

Nico doesn't try to hide he's feeling a bit nervous, which means if you or I were in his position, we'd probably have difficulties with keeping our bladders in check. With four years gone since he's ever driven a full-blown race car, the former F1 driver is curious whether it'll all come back to him once he's out on the track or he'll need a break-in period.

We should mention that Nico is not on the Nürburgring we all know and love, but rather the F1 GP track. However, what that tells us about Nico's lap is that it's going to be shorter, not necessarily less spectacular. Especially since it's a very wet track.

The thing that seems to impress Nico the most isn't the ID.R's downforce or its acceleration (both superior to a Formula One car's), it's the way you get in or out of the vehicle, and just how incredibly cramped it is once you get inside. Remember this comes from somebody who's spent the better part of his life inside an F1 race car.

The Volkswagen engineers had to keep things tight to fit all the batteries as close to the vehicle's center as possible. Given how low the ID.R is - it sits well below most people's hip line - they could have placed the packs on the roof and it still would have had a low center of gravity. They didn't, though, so they sit tightly around the driver, prompting Nico to exclaim "it's f-ing claustrophobic." It sure looks like it.

Watch the clip below to get more insight into Volkswagen's one-off electric race car and see Nico take it out on the Nürburgring F1 GP track and offer a free turn-by-turn guide of the circuit. 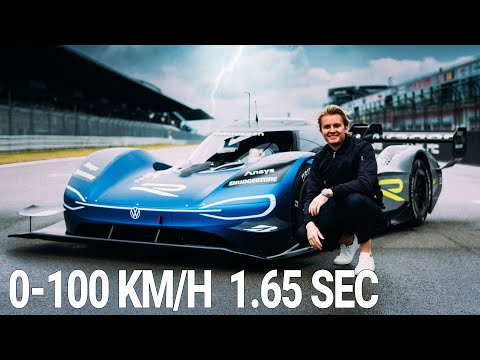