People like to talk about the world's quickest cars or debate whether Ferrari is better than Lamborghini, but the truth is that most of us can only realistically look at the hot hatch segment if we want to buy a performance-oriented car.
8 photos

With so many potential customers, it's no wonder the place is more crowded than ever. It used to be a simple (well, not really) choice between the Volkswagen Golf GTI, the Renault Megane RS, or the Ford Focus ST with minimal interference from Japan. Now, though, the South Koreans from Hyundai want a piece of the pie, and they seem to have pretty grabby fingers.

The new Hyundai i30 N is going up against some steep competition with most of its competitors having had plenty more time in the market to make a name for themselves. However, if the newcomer can prove itself a worthy alternative, it shouldn't be long before it makes its way into the shortlists of more and more buyers.

What better way to make room for yourself than go head to head with one of the segment's greats, such as the Volkswagen Golf GTI? Not many, except the German is kind of trying to cheat here. Instead of the plain vanilla GTI, they've sent the TCR version but, in fairness, sounds a lot more intimidating than it really is.

The only few things the TCR brings over the regular GTI are meant to make it more adept at track driving, so they don't really influence its acceleration. Well, apart from the extra 60 horsepower, that is. Yeah, the 290 hp the TCR has puts it way ahead of the i30 N's 250 hp, and if only that were the only thing going in Volkswagen's favor.

Some of you may know the Golf GTI TCR only comes with a double-clutch seven-speed automatic transmission, whereas the i30 N gets a six-speed manual, which is another disadvantage in a drag race. These two discrepancies could have been largely avoided by having a Hyundai i30 N Performance square up against the TCR. The enhanced version of the South Korean hot hatch gets 280 hp and an eight-speed auto, but it still weighs considerably more.

However, we can only play with what we have at hand, so TCR versus plain i30 N it is. Don't get us wrong, the race is still pretty thrilling, but that's mostly down to Volkswagen's terrible launch control system which seems determined to do its best to hamper the Golf's chances of winning any race after pulling a similar stunt against the Honda Civic Type-R. 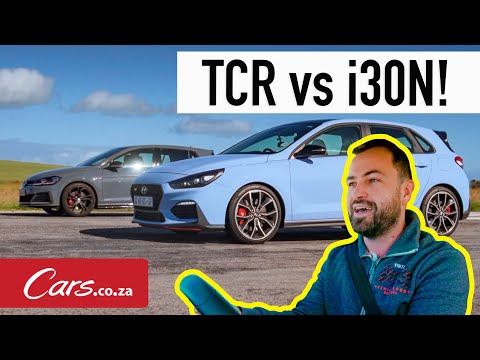