2 2018 Volkswagen Polo GTI Gets Detailed Walkaround Ahead of Launch

4 2018 Polo GTI Testing at the Nurburgring, Could Come Out Earlier Than Expected

Mihnea Radu
Cancel that Golf GTI because its slow as fudge. We saw how the Hyundai i30 N humiliated it in a drag race. But that was a more powerful model, while the Polo GTI... well, it isn't.
5 photos

The output of 200 HP isn't mind-blowing, especially when the Fiesta ST and Clio RS are supposed to do the same thing with smaller engines. But the advantage of using a liter is that boost comes in way faster.

We think that, in combination with the launch control system, is winning the Polo GTI these races. Yes, you heard right. The little buy is faster than its more famous big brother.

Four separate launches were done, and before you ask, the GTI has the performance pack that gives it a total of 245 HP and 370 Nm of torque. Only in the final sprint does this more expensive car do a decent job.

The launch control system is apparently putting the power down quicker. Having less turbo boost means the 2-liter used by the Polo responds better too. Last year, they also added an extra gear to the DSG gearbox of the Golf, so that could be hurting it too.

It seems everybody overlooked the Polo GTI as a slightly dull small hot hatch. With a quick tune, it's going to be a drag racing monster. 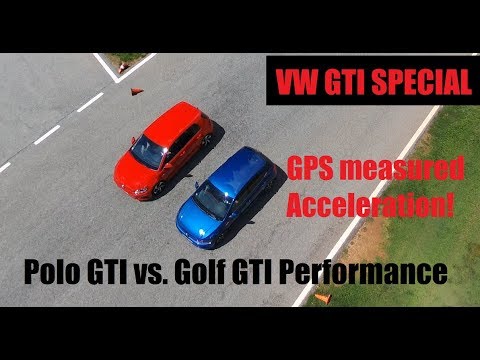