Rudy Valentino Lives On in This Classic Packard

Razvan Calin
If we were to put together a list of muscle cars in the V8 hall of fame from the Golden Era, it would take up considerable space in the infinity of the internet. Then again, there are muscle cars, and there are Muscle Cars. The difference becomes evident at the end of a 1,320-foot-long strip of clear land (preferably covered in tarmac).
121 photos

There are great names among the range-topping two-door, V8-powered apex predators with rear-wheel drive and illegal ancestry (we'll defend the choice of the adjective in a moment). The Impala Z-11 of '63, the Boss 429 of '69, the Z28 Camaro of '67, or the HEMI Mopars. The pick is yours on the latter, as long as there's an animal-inspired nameplate. You know, a swift bird, a voracious fish, or the occasional Challenger.

GM made a somewhat awkward decision in 1963 by getting out of racing at the dawn of the muscle car era. Furthermore, because they loved their Corvette to the point of paroxysm, they banned all other makes and models from their line-up to be more potent than the sportscar.

That was until 1970 -  a good year for the V8 muscle - when GM had enough of the horsepower (and displacement) wars and axed all competition with a MOAB (Mother Of All Behemoths) blow. A Chevelle, bearing two dreaded letters on the front grille and a mystic number behind it - SS 454. The "LS6" acronym was thrown in as an added bonus, capping the dragstrip claims of everyone else.

So, there was a Chevrolet Chevelle with a Super Sport aspiration and an engine to match that ambition. A 454-CID (7.4-liter) monster that "out-cubic-inched" the 440s from Mopar and out-gunned the 425-hp of the 426 Hemi with a 450-caliber power output. It was the only exception to the GM gospel rule of "Corvette supremacy," as the King Kong Chevelle took the power crown in 1970.

One surviving LS6 from that year – out of the 4,475-production run – is this Chevrolet Chevelle that holds its numbers-matching drivetrain to high stakes. Add the manual transmission (yes, the close-ratio, rock-crushing Muncie four-speed built for heavy duties), and you now have a special guest star.

Red with black stripes – a best-fitting livery for such a terror on wheels – over an all-black interior is a ruthless statement for uncontrolled drag rage. It is a ceremonial suit put on a "wanted dead or alive"-fugitive with nothing to lose. This car is a certified criminal and a double certified original (Jerry MacNeish of Camaro Hi-Performance and Rick Nelson of Musclecar Restoration and Design testify for the authenticity).

Why "criminal"? At this point, let me return to the previous statement about muscle cars' illegal (and distant) ancestry. In the late 40s, a race-governing body emerged from a prohibition-era-rooted legacy. When America was fighting alcohol consumption with radical bans, bootleggers shoved moonshine liquor in fast cars to sell it without getting caught by the police.

The enforced sobriety period ended in '33, but the cars kept running - in races against each other rather than from state troopers. The practice caught on, and in 1948, a bunch of former "runners" (illegal alcohol transporters) got together to form what is now NASCAR. However, some "'shine-runners" stuck to their fiscal-evading habits and continued with booze smuggling.

This Chevelle saw such fate, as it lived in Kentucky, and some folks there made a tradition out of the outlawed commerce that ended in the same year as the Great Depression. So, four decades later, the SS in this story was a loyal continuator of the hot-'n'-fast cars of the roaring twenties.

Sure, the 450 hp and the 500 lb-ft of torque (456 PS / 678 Nm) helped it get from the still to a nip joint in no time. Despite its unlawful occupation, the Chevelle kept a respectable demeanor (the gallery testifies to it). Tinted glass, Strato bucket seats (with shoulder harnesses), the electric clock, unique gauges, and AM/FM Radio (push-button operated).

However, the SS badge and the 454 LS6 put the "go" next to the "show." Power brakes (with discs on the front), performance suspensions, and the 12-bolt 3.31 Positraction rear diff pushed the Chevelle into the low 13s at the end of the standing quarter.

By the closing of the millennium, the Chevelle had been retired from the illicit affairs – and the road. Bought by an avid collector, the mighty SS underwent a full frame-off restoration to show standards. Most of the replacement parts are period-correct, including the carburetor, the radiator, the water pump, and the starter.

The paint job keeps to the original trim – Cranberry Red with black stripes that run along the power bulge on the hood. The "Cowl Induction" badging hints at the Turbo Jet 800-cfm Holley four-barrel carb on top of the aluminum manifold. To handle the 450-hp firepower, four-bolt mains, forged steel rods and crank, and solid lifters kept the 11.25:1-compression banging in check (listen to it at the end of the video). The once-tax-evading Chevelle seeks a legitimate new owner through the Barrett-Jackson block in January next year. 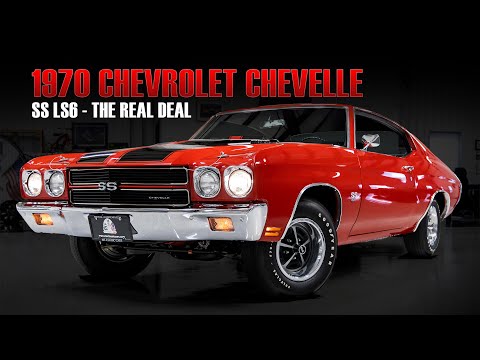