5 The Tesla Model S Plaid Can’t Hit 60 MPH in Under 2 Seconds Without Special Prep
Car video reviews:
Up Next

By now, everybody should know that Tesla has released the Model S Plaid, the latest version of its electric sedan that now comes with three motors and over 1,000 horsepower.
7 photos

It's been all over the news, which is what you would expect from a Tesla event, and, also quite traditionally, it wasn't all for the right reasons. It wouldn't be the Elon Musk we all know and love/hate (strike through the one that doesn't apply) if he didn't create at least a bit of controversy.

Up to yesterday, the main talking point has been Tesla's decision to go for a yoke instead of a classic steering wheel, prompting criticism from anyone with half a brain who can realize handling that thing in an emergency can pose a serious danger, but also from people with much more say in the automotive industry such as Randy Pobst, who demanded the Model S Plaid he was testing got a regular wheel instead after three laps around Laguna Seca.

Randy is going to take the car (prepped by Unplugged Performance) to this year's Pikes Peak International Hill Climb, and it'll be interesting to see if he'll use a steering wheel, or Tesla will pressure him in sticking with the yoke. We're sure the company would like to do the latter, but since it's his safety at risk, we doubt he'll accept if he has any doubts over the device.

However, after MotorTrend got the chance to subject the Model S Plaid to the first independent acceleration tests, the EV's 0-60 mph time became the main talk of the town. Tesla claims the Model S Plaid will do 0-60 mph in "under two seconds", and MotorTrend's tests have confirmed it will reach the target speed in 1.98 seconds, which, last time we checked, was indeed under two seconds. But there's a “but”.

To do that, two conditions need to be met. First, the car needs to be on a prepped surface, and by "prepped" we mean sprayed with VHT until it's so sticky, it could get a Guinness World Record for the world's largest flypaper. Second, the one-foot rollout rule has to be applied. With these two in place, the Plaid will indeed hit 60 mph in under two seconds all day long.

Pretty exciting, right? It is, and Tesla has just released the video to show it: a collage of reactions from the demo runs held during the night of the launch showing people screaming like they probably never did before outside their bedrooms.

But here's the catch: all those runs were held on regular asphalt, and in these conditions, the Model S Plaid will struggle to reach 60 mpg from a standstill quicker than 2.3 seconds. As it happens, the old Model S Raven, the car the Plaid replaces, also hit the 60 mph benchmark speed in 2.3 seconds. Don't ask us how, but it did.

With this data in mind, you'll look at the video below with completely different eyes. That's basically what successful manipulation looks like. These people were told the car accelerated in under two seconds, they believed it, so they told themselves they could feel it too. Brooks Weisblat from DragTimes also went on one of these rides, and since he basically sleeps with a Dragy next to him, he used the device to measure the EV's acceleration. It was a disappointing 2.7 seconds. That doesn't mean the car is that slow - we know it's faster than that - but it does show how gullible people can be when they want to believe something. 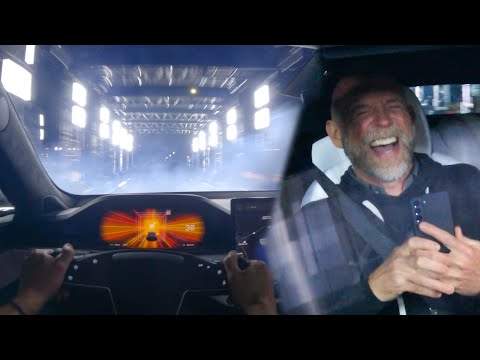