5 Tesla Model S Plaid+ May Have Died Due to 4680 Cell Production Issues
Car video reviews:
Up Next

A lot has happened in the Tesla world during the last few weeks. First, the Plaid event got delayed; then the Plaid+ version was canceled; one day before the event, the price of the Model S Plaid was bumped by $10,000; finally, on the evening of June 10, people got to see the new electric sedan in a typical Tesla presentation.
29 photos

What does "typical" mean? Well, first of all, it means Elon Musk took the stage for most of the time, for better or for worse. Franz von Holzhausen opened the ball wielding a sledgehammer, but thanks to his appearance and the clothes he wore, he displayed an uncanny resemblance to Negan, perhaps the most infamous villain of "The Walking Dead" universe. Luckily, no heads were bashed in.

After the thirty-minute-long presentation was over, with the sun completely over the horizon, the people in the crowd got the chance to experience a Plaid acceleration first-hand, albeit from the passenger seat only. Just like the Roadster event (technically, that one was the Semi event, with the sports car being the surprise), the demo acceleration run took place through an illuminated tunnel. Do you find that strange in any way?

Imagine these two scenarios: for the first, you're in a Tesla Model S, and you're doing a launch on a completely flat surface with absolutely nothing else but asphalt around you for miles; in the second, you're doing exactly the same thing, except this time you're on a narrow one-way street with cars parked on either side. Can you guess which will feel quicker?

It's precisely the same with these events. You'll notice the drivers line up for the launch and only go when the lights turn green. They do that for two reasons: to make sure the car in front is at the required safety distance and because the lights need to be in a particular sequence to enhance the sense of speed.

Brooks Weisblat's video is a clear representation of how easy it is to have our perception distorted. Watch the clip below and see how Brooks and his companion react to the experience (around the 6:30 mark). Then, check out the run with the Dragy (a GPS performance measuring device) activated, and you'll notice the Tesla Model S hits 60 mph (96 kph) in over 2.7 seconds.

We don't know about Brooks's colleague for the ride, but we're pretty sure he had experienced quicker accelerations than that. Despite that, he acted as though he had just been through a rocket launch. If you ask us, that's the result of expectations (1.99 seconds 0-60 mph) combined with a carefully constructed stage. We'll see how the Plaid does once first customers take their cars to an actual drag strip, which shouldn't be too long. 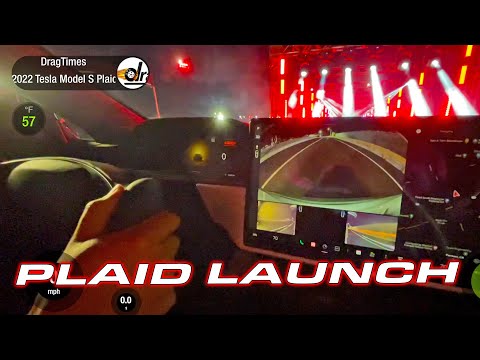