1 Next Mitsubishi ASX Might Be Smaller, Unofficially Puts Outlander DNA Inside a Captur

Aurel Niculescu
North America is falling in love (again) with unibody bite-sized pickup trucks. Over in South America, the passion never subsided, and automakers know that. So, how about something Japanese for the ute-fan regions?
17 photos

Until Hyundai and Ford introduced their Santa Cruz and Maverick unibody compact pickup trucks many folks probably thought the segment was dead in the United States. Well, it seems they were proven wrong. South American customers seemed to know better. And did so for years. Thus, they are also getting cool pickup trucks of their own, such as the upcoming Chevy Montana.

But there’s also one more region that’s deeply in love with the idea of having lots of space in the back of a vehicle to haul all kinds of stuff. Only that in Australia they don’t necessarily want trucks. They will also be happy with a ute (a coupe-pickup based on a passenger car). And, for people who always love to try new things, virtual artists have their solutions.

Unfortunately, they’re digital and mostly wishful thinking. Such is the case with the pixel master better known as theottle on social media. Remember that not long ago, he satisfied America’s newfound craving for unibody compact pickup trucks with a CGI transformation of the all-new Mitsubishi Outlander into a proper Santa Cruz and Maverick rival?

Now he’s back with a new episode in the Japanese saga of little pickup trucks that aren’t real (sadly). Only now there’s a crossover twist, as his work is based on the quirky Mitsubishi Eclipse Cross. And this time around, the pickup has all the makings of a great ute: just two doors, two seats, and (perhaps) some ample space in the bed.

Oddly enough, one might dare say the fake Mitsubishi Eclipse Cross Ute looks even better than its crossover SUV counterpart from the real world. Alas, as beauty is always in the eye of the beholder, we aren’t going to hold it against anyone who says this is not their cup of tea. But it still looks good, right? 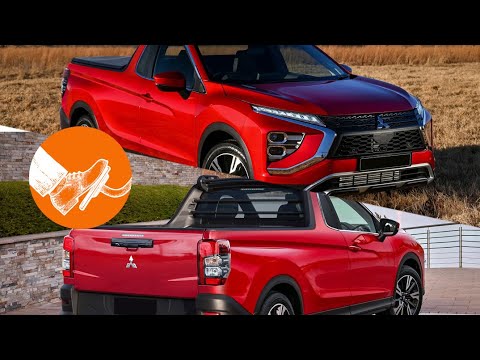