The quest for cleaner vehicles but the desire for SUV vehicles was in the opposite direction.

But the Mitsubishi figure-out a way to solve the problem with the Outlander PHEV.

The styling was upgraded when compared with its predecessor, with a new front fascia. Its appearance looked more modern, with some chromed details on and around the grille. The smaller headlights were available with LED light, which not only lights better, but they also are using less electricity to run. The rest of the car still looked like a jacked-up station-wagon.

Inside, there was enough room for up to five passengers. Unlike the older Outlander, which was available with seven seats, the PHEV had to carry the batteries and those are stored under the floor. There are 80 cells there and the 12kWh batteries take some space. Mitsubishi managed to install three true seats in the back, with enough legroom and headroom.

The PHEV stands Plug-in Hybrid Electric Vehicle. Basically, the car is intended to be charged at home and start the day with the batteries fully charged. On regular home-outlet power supply, that would take up to 5 hours. 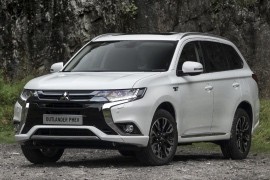