1 "Stemless" Bike Handlebar Attaches Directly to the Fork, Is Light and Reliable

4 Guy Straps a Jet Engine to His Bike, Flies Down the Street at 83 MPH

In our search for speed, humans have achieved some pretty amazing feats. That’s not to say that there haven’t been some crazy ideas, some that actually ended quite badly for the speed seekers. However, let’s take a look at what happens when you strap a jet engine to a standard road bike and live to tell the tale.

Folks, if you’ve missed it, about a week ago, a YouTube channel under the name of Soar Tseng, posted a video of a gentleman that did something most of us have been dreaming of since we were kids; strap a rocket engine to something, in this case, a carbon fiber road bike.

This story is about a gentleman named Wang Nan, who ended up achieving his so-called childhood dream. After reaching adulthood and realizing he can live out his childhood without having to ask mom and dad for cash, he went to work putting a jet turbine on a road bike.

Seeing as how the jet engine he strapped to his bike is KingTech K-450G4+ turbine with a reduced price of $5,950, if I was his mom and dad, I'd ask him if he didn’t want a car instead. With a consumption of 1,100g of fuel per minute, this turbine offers 45 kg (99lbs) of maximum thrust. What does all of this mean in terms of a man on a bike? Well, you’re about to find out.

In order to understand what can be achieved with something like this, you must first know all the pieces of the puzzle. In this case, what sort of vehicle was used, and rider weight, not to mention ability. Folks, if you haven’t yet grasped what it means to strap a jet engine to anything, check out the video below, and come back to the text.

All good? Ok. The bike that was used for this feat had to be something that is able to withstand the levels of stress exerted onto a frame from such a power source. This led Wang to a Taiwanese company by the name of Roxycle that’s known for producing carbon fiber bicycles able to withstand up to 200 kg (441 lbs) of force.

Since bicycle frames aren’t constructed to house jet engines, Wang called upon the expertise of a university professor to create a frame addition capable and safe enough to achieve the feat. Then, there was the importance of tires suitable for something like this. With tires that can withstand 175 lbs (79 kg) of force per square inch, the bike was ready.

With a few other adjustments, mainly safety-related, Wang was ready to go viral on several social media channels, including Facebook, YouTube, and other international new publications.

Now, the video shows Wang, in the middle of the night, with only dogs out on the streets, getting ready to secure himself to his destiny, time in which we hear the turbine power up like any jet would. Sure enough, with the turbine increasing in power and displaying a red-hot flame behind the bike, Wang shoots off into what I consider one of the most dangerously fun quarter-mile runs I've seen in my life.

The first thing you notice is that Wang struggles a bit to hold the bike straight, in the process remaining stable until the very end. That dog I mentioned earlier, he got out of the way really fast. Heck, just imagine what a jet turbine would sound like in the middle of the night. Towards the end of the video, Wang isn’t to be seen but the engine roars on.

This brings me to the final issue with this event, laws. During this spectacle of speed, Wang did end up breaking some laws and was fined by the local police a whopping equivalent of $6.51. If I was Wang, would I do it all over again? You bet your bottom dollar!

So how fast did Wang fly with his contraption? Well, over the course of thirty seconds, this trinket was able to achieve a top speed of 83 mph (133.5 kph) before running out of juice. According to Liberty Times Net, this entire construction cost Wang near 500,000 Taiwan Yuan, around $18,000 (at current exchange rates) on the installation and operation of this vehicle. Apparently, if you like speed –driven experiments with little-to-no social consequence, move to Taiwan. 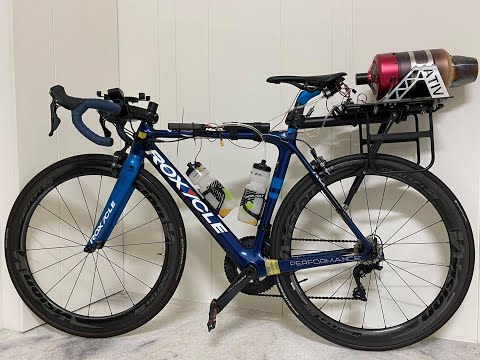