2 Lucid Air to Be Backed by 20 Sales and Service Locations Across the U.S.

For so many years, the Tesla Model S has been the go-to EV when it came to drag racing that it almost became a little boring. Luckily, the Lucid Air seems to be just about ready to jolt us out of our slumber and make things interesting again.
1 photo
We were hoping the Porsche Taycan would be able to do that, but the German's first effort in the electric vehicle department turned out to be a bit of a disappointment. The Taycan is a great car in a lot of ways, but it fails to better the Model S where it matters most: range and acceleration. People argue that the smaller Model 3 Performance would be a much better-suited competitor, but with a price that's up to three times higher, it's hard to take that seriously. Besides, it turns out the Model 3 Performance with the optional Track Pack might be the better choice for track driving regardless of the price.

Now, though, it looks like the Lucid Air is going to succeed everywhere the Taycan failed. The luxury sedan is starting to take all the Model S' accolades one by one. Not that long ago, it was announced the Air would receive a 517-miles maximum range rating from the EPA. The news arrived very soon after the Model S Long Range Plus became the first EV to break the 400 miles barrier, a feat that was considered remarkable at that time - and, as it turned out, for a very short time.

That's not all. While Tesla is responsible for popularizing the term "frunk" (front trunk), it's the Lucid Air that's going to offer the biggest one in the EV segment when it launches next year. Interior space is another thing electrics are very good at compared to their ICE counterparts - again, the Air will offer class-leading cabin space, trumping the Model S once more.

And still, there's more. Closely connected to that very impressive maximum range of 517 miles (832 km) is the Air's drag coefficient of 0.21 - the lowest of any production vehicle. Is there anything the Air isn't the best at? Well, there probably is something, but it's definitely not charging speed. That's because Lucid's first model is expected to replenish 300 miles (480 km) worth of range in just 20 minutes - provided, of course, the right infrastructure is available.

After numerous hints and teasers, the emerging EV maker has finally confirmed the one aspect that's going to hit Tesla and its fans alike the hardest: the Air's quarter-mile time. Unless it can pull the new Roadster out of its hat over the next few months, it looks like Tesla will lose the EV quarter mile drag racing crown to Lucid's battery-powered sedan.

In a short clip released a few hours ago, Lucid shows one of its test vehicles cover the benchmark distance in just 9.912 seconds, a time that would make it not only the quickest EV on the market but also the second quickest production car of all times, behind only Porsche's 918 Spyder hybrid hypercar (9.81 seconds).

9.9 seconds for the quarter mile and a launch date set for September 9 - or 9.9, if you like. Imagine if they had launched it back in July: we would have had a seven-second stock car. What? That's not how things work? I know, but it does seem at the moment that Lucid can do pretty much what it wants with the Air. 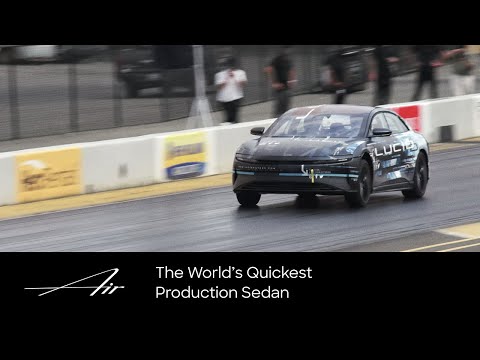