Porsche Believes Electric Drives Are Not Enough, Looks into eFuels

You might have noticed an influx of videos lately showing a Tesla Model 3 Performance lapping various tracks, including the almighty Nürburgring. Whether it was bullying Porsche 911 GT3s or keeping up with tuned Acura NSXs, the electric sedan was always punching above its weight.
1 photo
The occasion was simple: a French pro driver called Sebastian Vittel received a Tesla Model 3 Performance with the v.2 Track Package from Tesla France to test and, eventually, do a timed lap around the famous German track, and being the nice guy that he is (he really is), he filmed bits of his experience with the car.

While we still wait for the video of the Nordschleife lap, Sebastian released a slightly different clip than the ones we've become used to. Instead of showing us his on-track antics, he parked the Model 3 for a change and talked about the things you need to pay attention to if you want to bring yours to the track (and the Nürburgring in particular).

There are two things worth mentioning from the start. First is that Sebastian fully encourages Model 3 owners to race their cars. Second is that you'd be far better off with a Performance version, preferably with the Track Package installed than any other version of the 3.

Assuming that's the case, the French driver identified four key aspects anyone interested in following his example should pay attention to. They may seem a little trivial, but it wouldn't be the first time some small things made a world of a difference.

So, it all starts with the wheel nuts. Sebastian recommends checking them regularly and using a torque wrench to tighten them to 170 Nm (125 lb-ft). Then, there's the tire pressure. Since the Model 3 P comes with low-profile Michelin tires, he says the ideal pressure would be 2.9 bar (42 psi) at the front and 2.8 bar (40 psi) at the rear.

Thirdly, there's the whole braking situation. We've seen how another experienced driver lapped the North section of the Nürburgring in a Model 3 and all but ruined its brake rotors. Sebastian says you should have regenerative braking set to maximum (more on that in a second) and let it do its thing as often as possible. Since the Nordschleife is a pretty free-flowing track with very few areas where hard braking is required, his pads and rotors look in tip-top condition after three days of track driving.

Finally, Sebastian goes into his recommended driving settings. Tesla France had the profile saved under the "Porsche killer" name, showing Elon Musk's sense of humor is contagious among the company, even in its overseas branches. Apparently, what you need to kill a Porsche is a 30:70 front-to-rear power distribution (35:65 works too), traction control switched off completely (-10. Sebastian recommends -8 even for beginners), and regen braking set to 100, as we've said before. Apart from that, switching off the AC goes without saying as it puts extra strain on the battery.

Invariably, Sebastian finds himself comparing the Model 3 to the Porsche Taycan, and he says the American sedan feels light, whereas the German version does a worse job of hiding its weight. Therefore, if Sebastian was given a choice, he would always take the Model 3 Performance with the Track Pack over the Taycan for any racetrack activity. Oh, and he drives a Porsche, so no, Elon didn't bribe him. 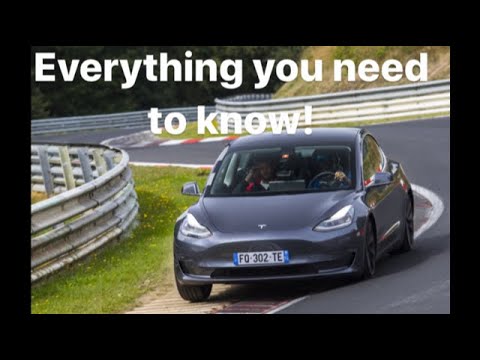