Arguably one of Chevrolet's most successful model series, the mid-size Chevelle was part of the General Motors A-body family for just three generations (between the 1964 to 1978 model years). Still, its popularity has made it a big target for collectors and classic car dealerships alike.
27 photos

Naturally, one can find a multitude of used car listings – both private and from dealers – looking to make big profits on the back of unsuspecting buyers. That means one always needs to tread carefully when on the market for such classically enticing rides. And, perhaps, sticking with a respectable classic and new used car dealership will keep one safer, even if that means enduring slight markups.

For example, one good target for “looting” the Chevy Chevelle treasures would be Grand Rapids, Michigan-based Garage Kept Motors. Over time, we have seen quite a lot of Chevelles proudly grace their inventory, from restored SS 396 wonders to iconic 454ci V8 examples – and every time there was a catch, the dealership was also frank about it.

Take this recent white-striped and Hugger orange (over a black vinyl interior) example, a ‘72 Chevy Chevelle that has all the 454ci markings of a great SS (Super Sport). But GKM’s description made a point out of knowing from the very beginning that we are dealing with an SS tribute sporting a non-numbers-matching big-block Chevy V8. Alas, there are a lot of other highlights that might keep a Chevelle fan interested.

The odometer readout stands at 14,976 miles (24.102 km), the Hugger orange paintjob seems professionally applied, and the upgrade presentation looks impeccable, as it even comes complete with a squeaky-clean engine bay, not just a smashing exterior and interior treatment. Alas, there is one nasty little detail that we always dread talking about.

That would be the asking price, which right now stands at precisely $54,500. If that is too much or too little, we are going to let you be the judge of that. All we can say is that another (numbers-matching) SS unit was recently advertised for no less than $120k! 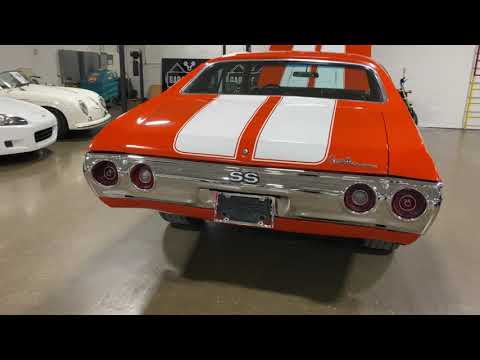