1 Lifted 1987 Chevy K10 Has Dreams of Winter, but It's Sourced From California

Part of General Motors’ A-body platform team – alongside other heroes like Monte Carlo, Pontiac GTO, Oldsmobile Cutlass, or the Buick Regal – Chevrolet's Chevelle remains one of the most coveted mid-size cars of the 1960s and 1970s. Especially in the SS (Super Sport), muscle car-rivaling form.
20 photos

Naturally, it was all because of the newfound money-printing way of stirring up the muscle car pot with mid-size cars that sported huge land-yacht-like big-block engines and an assortment of tasty/tasteless aero details. So, just in case the models from the age are of significance to you, here is a potential 1966 Chevy Chevelle Malibu SS hero.

Diehard Chevy enthusiasts will certainly notice the first of several quirks. The Chevelle SS (Super Sport) was yet another entry from GM into the muscle car battle and the early ‘64 and ‘65 model years did indeed sport a Malibu SS badge as well. However, this one is said to be of the 1966 model year variety. Even more so, this should have been a proud representative of the Chevelle SS 396 breed... but it is not.

Instead, according to the dealership description, this “restored, resprayed, and up-powered 1966 Chevrolet Chevelle Malibu in medium metallic blue with a black vinyl top over black” interior features a non-matching 454ci big-block V8. You know, perhaps someone decided to take up “there’s no replacement for displacement” for granted.

Additionally, this light-patina-clad Chevelle SS has arrived with almost 90k miles (89,710 miles/144,374 km, to be more precise) on the odometer in the inventory of Grand Rapids, Michigan-based Garage Kept Motors. Plus, yet another cool highlight is represented by the silver-painted, factory 15-inch slotted steel wheels shod in massive 245/60 Grand AM Radial G/T tires.

Moving inside, the serious cockpit is a window into the 1960s with stuff like black looped-pile carpets, a horizontally pleated black vinyl upholstery for the front bucket and rear bench seats, or the stock instrument panel and the augmented white-faced Equus gages, among others. Under the hood, the orange-painted engine block and the Holley air cleaner do show the M/T-branded 454ci V8 means big-block business.

But, of course, there is also the little detail of an equally large asking price of $49,900... 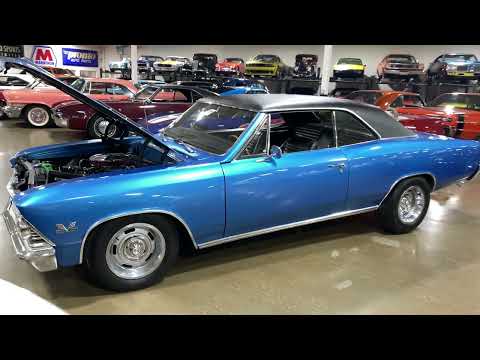