One of the most successful GM nameplates, Chevrolet’s Chevelle, definitely gave all of its 1960s and 1970s competitors a run for their money. Especially when bulked up in SS (Super Sport) form.
26 photos

They say that second-generation Chevy Chevelle SS 396s constantly beat their rivals of the time, such as the Pontiac GTO, Oldsmobile 442, Mercury Cyclone GT, Plymouth GTXs, and more. Sure, it could be just fabled history. Or not. Does anyone dare to pass the opportunity of trying out the sweet taste of victory when the SS 396 opportunity presents itself?

If not, then here’s a 1968 Chevrolet Chevelle SS 396 that is about as “muscle car royalty” as it gets. Right now, it resides in the inventory of Grand Rapids, Michigan-based Garage Kept Motors, fully dressed up in Matador Red attire over a black top and matching black interior. It looks stunning courtesy of a clean restoration and comes with documentation and factory looks.

For example, it has the stock “Chevrolet Motor Division” chrome center caps on the factory steelies, as well as the Black Imitation Leather (RPO Code TR 765) covering the front and rear seats. Even better, it hasn’t been driven much, sporting a mere 50,985 miles (a little over 82,000 km) on the odometer. That’s less than 1k miles (around 1,600 km) on average, over 53 years.

But, of course, the highlight of this Chevelle must be its 396ci V8 heart and soul. It is a numbers-matching L34 396ci V8 with a four-barrel carb and wears a proud “396 Turbo-Jet 350 HP” inscription to signal its prowess. Matched to a four-speed manual transmission, it communicates with the driver through the accelerator pedal and the factory, floor-mounted Hurst shifter, just as Chevy intended.

Now there is only the small detail of trying to grasp the enormity of classic car quotations. This Chevelle SS 396 isn’t cheap, by all means. As such, it comes with an asking price of no less than $74,900. But it also might be well worth it... 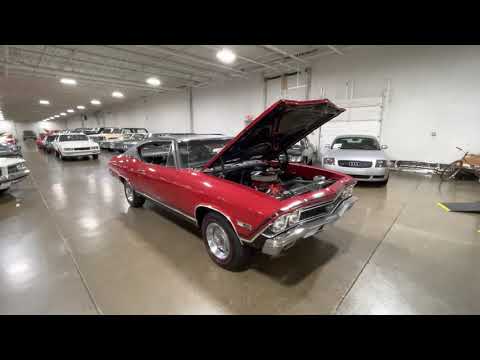