Lexus LFA Sacrificed to Be a Drift Car in Japan

Gabriel Brindusescu
Yesterday we saw a Toyota Prius turned into a drift machine using a high-power electric motor turning the rear wheels. But that’s not the only oddity presented at the Tokyo Auto Salon 2015. Here, take this one off Lexus LFA specially built to go sideways.
1 photo
As far as we can tell, this could be the most expensive car to be transformed into a drifting machine. There are only 500 LFA units ever made and one appears to have been sacrificed for the sake of going sideways in competitions. They even ditched the V10 masterpiece under the hood.

Yoichi Imamura is the one who built this thing and under that long hood you’ll now see a V8 TRD NASCAR engine, which in fact is more powerful than the original unit in the LFA. A manual sequential gearbox has also replaced the high-tech 6-speed auto and power goes to the back via a locked diff most certainly.

The interior is stripped out as well and the exterior gained a widebody Rocket Bunny kit to fit the wider track, a front splitter and a huge rear wing. Lets just hope they won’t crash it.

The car will be raced by OTG Motorsports in the D1 GP drifting season. 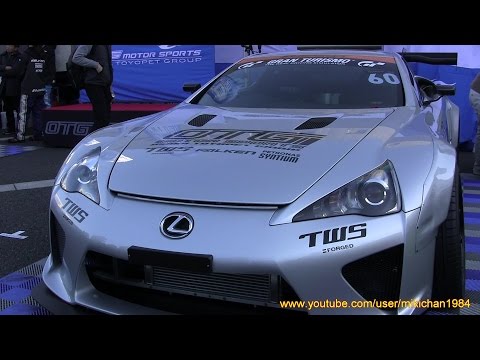