Lexus unveiled the second generation of the NX in June 2021, and despite its look very similar to its predecessor, it was a completely new vehicle from tip to toe.

The NX was the premium sibling of the Toyota Rav4, and they both shared the same TNGA-K platform with the Avalon or the Highlander models built by the same Japanese carmaker. That allowed front or all-wheel-drive systems, gasoline or hybrid power engines, and starting with the 2022 NX, a plug-in hybrid.

The 2022 NX featured a new front fascia with a more expansive "spindle-grille" design. It wasn't everybody's cup of tea, but it worked well for other vehicles within the Lexus range. It also sported new LED headlights and L-shaped daytime running lights. The door panels and fenders were a mix of curved angular lines and curved areas. At the back, the taillights featured a connecting light strip that ran across the tailgate. Its raked-forward windscreen and C-pillars enhanced the vehicle's dynamic look, while the roof spoiler created an even sportier image.

Inside, Lexus installed a 7" instrument panel named Multi Instrument Display (MID) complemented by a 10" Head Up Display (HUD) available as an option. The carmaker placed a standard 9.8" touchscreen above the center stack for the infotainment unit, with an option for a 14" display. It featured wireless connectivity with Apple CarPlay and Android Auto, enhancing the driver's experience. Lexus kept the physical turn-dials for the volume and climate control unit. The NX provided seating for four with high-bolstered front bucket seats and a bench for two in the back.

Under the hood, the compact SUV featured a range of four engines, starting with a 2.5-liter inline-four that replaced the older 2.0-liter unit and went up to a turbocharged and electrified 2.4-liter, 275 hp four-banger. 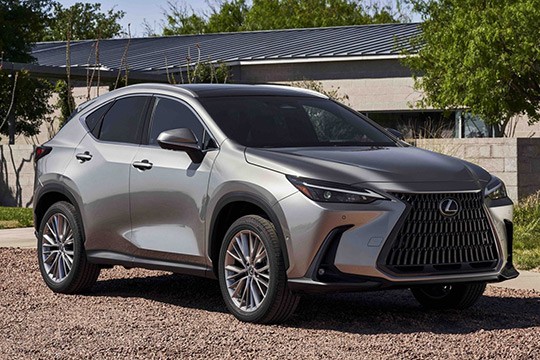