Lexus introduced the fourth generation of the LX in 2021 based on the Toyota Land Cruiser J300 series.

It used the same body-on-frame GA-F platform but was heavily enhanced with luxurious amenities that belonged to the premium segment.

The 2021 LX was not developed as a new vehicle from the ground up. While it still shared many technical components with the less-expensive Land Cruiser, it featured specific details and assemblies for the premium segment. At the front, it featured the specific Spindle-grille. While that design element looked proper for a sedan or smaller SUV, it resembled a gate, or a wall, when placed on the LX's tall and wide front fascia. It was flanked by a pair of tall scoops, which hosted the LED foglights. But the connection with the Land Cruiser J300 is obvious when viewed from the side due to the same profile. At the back, the LED taillights featured a light strip that ran across the tailgate. A roof spoiler enhanced the car's look, even though it wasn't that much of a use.

Available with a five or four-seat layout, the LX's interior was more appropriate for a luxury vehicle than any Land Cruiser. Its instrument panel featured a total of 19.3" screens. An upper 12.3" monitor showed the infotainment system, while a lower-mounted 7" display served as a control panel for the climate control and Multi-Terrain Select command center.

Under the hood, Lexus installed a twin-turbo V6 powerplant paired with a ten-speed automatic gearbox. Power went in all four corners, and unlike the third LX's generation, this one featured a longer wheel-travel for both axles. Thus, Toyota confirmed its expertise in the off-road area. 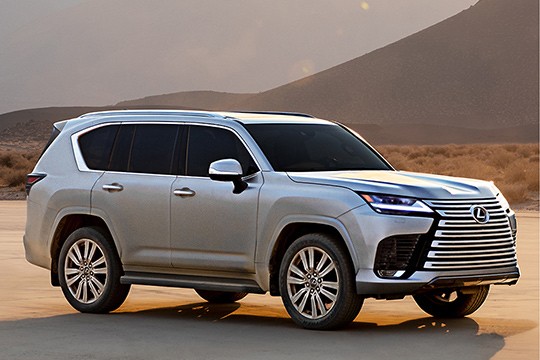