5 Lexus RC F Convertible on the Way
Up Next

Gabriel Brindusescu
Remember when we were saying that a simple exterior shade and a set of wheels can totally change a car’s personality? Well, just take a look at another example here coming from wheel specialist Vossen and its special Lexus RC F SEMA project.
1 photo
You know the close relationship between Japanese cars and Vossen. There are more Lexus cars riding on Vossen wheels than LFA supercars; and yes, there are LFAs on those rims too. And for this year’s SEMA Show, the company actually teamed up with the automaker along with VIP Auto Salon for a special project - the #instabuilt 2015 Lexus RC F.

Fans from all over the world voted on the @LexusUSA Instagram page to build an RC F they wanted to see at SEMA in Vossen’s booth. The selection process took two weeks after which CEO of VIP Auto Salon, Clark Ishihara, was tasked with building the project in less than four weeks.

The stock Lexus RC F thus gained a set of lightweight forged Vossen Precision Series 311 directional rims, measuring 20x9 in front and 20x10.5 at the back, finished in graphite.

Still, that was not enough for a showcar, so they went berserk with an amazing crude blue shade for the whole body, new brakes, a discreet bodykit, different exhaust, a lowered suspension, new seats and even a slightly changed steering wheel. Check them out bellow and raise your hand if you'd wish them to make another clip with the RC F doing a burnout on those new rims. 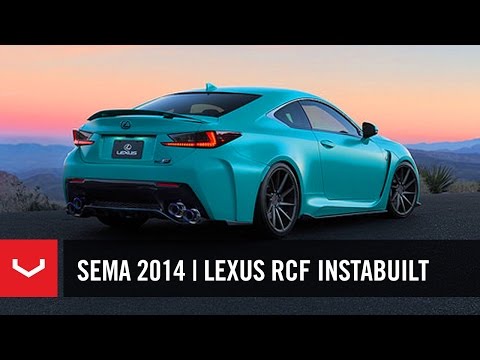