Lexus introduced the fifth generation of the RX range in 2022, a vehicle that showed a slight improvement in the exterior styling but a more refined interior and improvements in the safety sector.

After more than 3,5-million units sold, the RX range was a bestseller in the carmaker's lineup. It did that in two decades across four generations since 1998. It was also at the forefront of the hybrid technology in the SUV segment, paving the way for more electrified vehicles on the market. Lexus built the fifth generation of the RX on the enhanced GA-K platform, which allowed it to offer the vehicle as a gasoline-powered vehicle, a hybrid, and a plug-in hybrid.

Even though the car's shape looked virtually unchanged, there were important modifications. It featured a longer wheelbase, a lowered roofline, and an extended hood. At the back, the coupe-like tailgate was raked-forward, emphasized by the blackened part of the C-pillar. In addition, the car's headlights were more horizontal than before and featured triple-LEDs. Moreover, the L-shaped DRLs enhanced the sporty look of the vehicle.

The interior featured a 14" infotainment display placed atop the center stack. Despite the general trend of creating a unitary line of screens with the instrument cluster, Lexus chose differently by installing a classic instrument cluster in front of the driver. Depending on the trim level and options, the car offered a leather-wrapped interior with split-folding rear seats and enough comfort for five adults.

Under the hood, Lexus understood that different countries had different needs, so it provided the RX with a turbocharged gasoline engine for the Eastern European market. At the same time, the rest of the world received only the hybrid and plug-in hybrid versions. The latter was a premiere for the RX range. 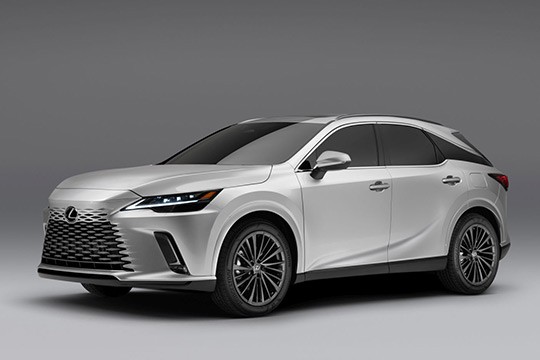