Lexus refreshed the seventh generation of the ES range and unveiled it at the 2021 Auto Shanghai, showing fewer exterior changes but more upgrades for the interior and driving dynamics.

Ever since its first generation, Lexus tried to catch more customers from Acura's buyers. To convince them, it tried to offer better technologies and more luxurious features. But the carmaker was also obsessed with quality control, and it topped the ranks for the most reliable brand in the world several times. But some of the ES features were outdated, and Lexus tried to fix that with the 2021 model year.

On the outside, there were not too many changes. The front fascia still retained a similar spindle design for the grille but with horizontal slats in the background instead of a mesh design. On the sides of its apron, the designers installed smaller side scoops than on its predecessor. Its angular headlights swept-back featured horizontal V-shaped LEDs for the daytime running lights.

Inside, the Lexus finally introduced a touch-screen for the infotainment system, but it didn't give up to the touch-pad from the center console. To make the new, standard 8" displays easier to reach, it moved it forward 4.3 inches (11 cm). A 12.3" unit was on the options list. The carmaker also added rear-view cameras instead of mirrors, with the screens mounted a the bottom of the A-pillars. 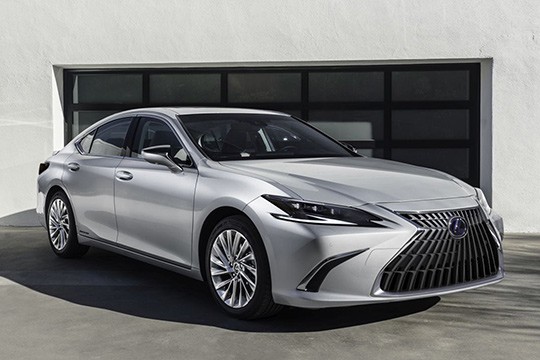