Toyota and Subaru joined forces and unveiled two new vehicles in 2021: the bZ4X and the Soltera, respectively.

But Toyota also had a plan on a premium version of the two: the Lexus R450e.

Like other Toyota products rebadged as Lexus, the R450e had to go through further testing before being greenlighted to get into production. Moreover, it had to show a different look to match the premium carmaker's design language.

From the outside, the Z450e showed a spectacular reinterpretation of the spindle-design theme from the rest of the Lexus range, albeit it didn't sport the shiny, chromed mesh grille. Instead, it featured a unique apron design, with a lower-mounted grille crossed by three slats. The centerpiece was a gray element flanked on the upper side by the narrow, sharp-looking LED headlights. On the sides, the sculptured door panels and the up-kick part led to the broader shoulders above the rear wheels on the quarter-panels. The entire design language was named "seamless E-motion" by Lexus.

The car sported a cockpit design inspired by the Tazuna concept, which means that the driver had to make the minimum effort to watch and control the vehicle. For that, the carmaker installed a head-up display and a 14" multimedia screen atop the center stack. In addition, Lexus placed the controls for driving modes on the center console. Last but not least, the yoke that replaced the steering wheel was something unusual for this premium Japanese brand.

Since the R450e was based on the same e-TNGA platform, it could offer the same powertrains as its siblings. Its battery pack consisted of 96 cells and delivered a total of 71.4 kWh of energy. 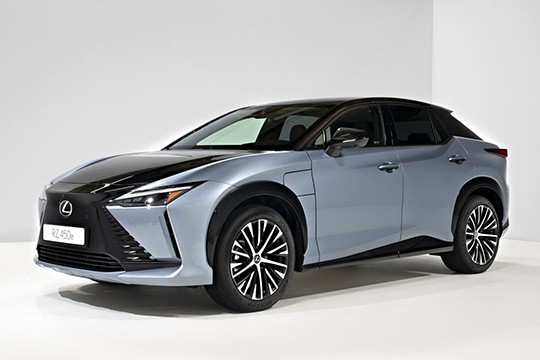