5 Inside Lori Harvey’s Extended Birthday Celebration on a Yacht in the Bahamas
Car video reviews:
Coverstory

American millionaires make out the majority of the world’s superyacht owners. But the truly jaw-dropping models belong to a few billionaires, and Larry Ellison’s megayacht is one of them.

For those who might not be familiar with Larry Ellison’s name, let’s just start by saying that he recently became the fifth richest person in the world. Learning that your already massive wealth has been appreciated by a whopping $16 billion is one of the best ways to end the year, and that’s exactly what happened to Oracle’s famous co-founder in 2021.

At the end of last year, Ellison’s net worth reached $136.2 billion, according to Forbes, surpassing that of Google co-founders Larry Paige and Sergey Brin, and getting very close to Bill Gate’s position on the list of billionaires. The giant software company that Ellison co-founded back in 1977 hasn’t been as successful as newer-generation names such as Facebook and Amazon over the past years, but in December 2021 had its second-best day in two decades, ending the year with an overall 59% gain in stock price.

And that’s not all. The tech mogul also made a fortune after famously buying a $1 billion stake in Tesla in 2018. As CNBC reports, his shares were worth $16 billion by the end of last year. Now officially the world’s fifth-richest person, the 77-year-old billionaire can certainly “lay back” and make the most of his stunning superyacht if he hadn’t so far. Designed and built to his exact specifications, Musashi is a living example of Ellison’s outstanding creativity and vision.

The Japanese name was by no means a superficial choice. On the one hand, Ellison’s passion for this culture was reflected in all of his previous yachts, which were all incredible works of craftsmanship, from the 190-foot (58 meters) Ronin and the 246-foot (75 meters) Katana to the giant 452-foot (138 meters) Rising Sun. Musashi was only the culmination of these oriental-inspired designs. And on the other hand, the legendary warrior’s personality itself was infused in the superyacht.

Sixteenth-century Miyamoto Musashi was not only one of the most famous samurai warriors in Japan’s history but also an exquisite artist with multiple talents. “Subtle but unconquerable, with clear lines but many concealed elements, with an open structure, but closed where necessary; [she is] entirely inspired by Musashi’s character,” Sander Sinot, of Sinot Yacht Architecture and Design, told Boat International.

Together with the prestigious Feadship builder and De Voogt Naval Architects, the Sinot studio brought to life the floating Musashi a little over a decade ago. At the time, the majestic 288-footer (87.7 meters) was revolutionary for its size category. As expected, it went on to win four major awards in 2012, including The International Superyacht Society Awards for Best Interior and the Asia Boating Award for Best Custom Built Yacht.

The minimalistic Japanese style is reflected in every aspect of the interior design, starting with the furniture and the materials that were used, and continuing with the numerous artworks and sculptures throughout, including a Hiroshi Senju painting of a waterfall that’s illuminated by custom lighting, in the upper saloon.

The exquisite Japanese design is present not just in the main areas but also in the spa room, featuring traditional shoji panels. Even more surprisingly, the onboard gym that’s typically a very modern element, was built with glass sliding walls so that it can become an indoor or outdoor space while also creating a harmonious, relaxing atmosphere, Boat International reports.

The vessel’s unconventional layout was said to have set new standards for five-deck models in terms of spaciousness and connection to the surroundings. The lower deck is almost entirely dedicated to technical spaces and the crew, with the gym and the spa located where the tender garage would typically be placed. Instead, the tenders are kept in an area on the main deck, which turns into a giant beach club.

The cozy lounge that doubles as a cinema is also situated on the main deck, together with all the guest cabins. Half of the entire upper deck is dedicated to one of the master suites, with a second saloon unfolding over the rest of the deck. The bridge deck offers stunning panoramic views for the second master suite, while the spa pool is the main attraction on the top deck.

Onboard this luxurious superyacht, not only are there two generous master suites, but the other cabins aren’t conventional either. Two of them feature a full wall of windows for an incredible connection with the outside, while the rest all feature en-suite bathrooms and dressing rooms.

Masterfully blended with the traditional samurai-inspired design, the modern American touch is also impressive - the huge beach club also includes a basketball court, while the aft saloon converts into a state-of-the-art cinema, with an ultra-widescreen concealed in the deckhead, plus a high-end audio-visual system and projector.

With an estimated worth of $160 million, this truly unique samurai=style superyacht is indeed fit for the world’s fifth-wealthiest person and one of the most creative minds in the high-tech world. 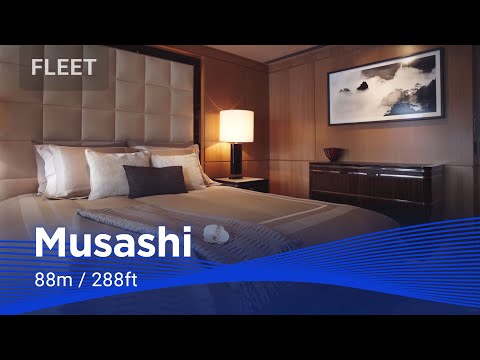