2 The BMW 3.0CSL Hommage R Sound Is a Bit Underwhelming

5 2016 Chevrolet Camaro Revs With Anger
Car video reviews:
Up Next

Owning a car with a loud engine and an even louder exhaust puts a very serious responsibility on your shoulders. In more ways than one - OK, maybe just the one - it’s similar to having a gun: you have to be very careful when you use it in public, as others might get hurt.
1 photo
And since these cars also tend to look pretty special, people will flock around, so there’s definitely no audience shortage. In fact, whenever fast, loud cars gather around on a public street, there are two types of people they encounter: those who are there specifically to see and hear them and to drool in their direction - this type is easily recognizable as they are all wielding their smartphones or video cameras; and the innocent bystanders who are just minding their own business, trying to get on with their normal lives, oblivious to the fact that a kid’s wet dream is about to go right past them.

As you’d expect, the first category is mainly made up of men (well, we might as well call them boys, really), while the second is largely dominated by women - with envious men filling up the remaining gap.

As we very well know, the streets of Monte Carlo are the perfect place for supercar spotters and, generally speaking, for coming across the kind of cars you would otherwise never see in your entire life. The owners of said cars are very much aware they are being watched, and since they’re such good sports - but also because they enjoy it - they don’t say not to revving their engines and allowing the exhausts to detonate. Especially when entering the tunnel made famous by the Formula One GP held there.

You’d think, then, that the locals had gotten used to it and are immune to the sound of banging pistons and burnt gases being forced out. Well, yes. And also, no. Here is some proof for the second: 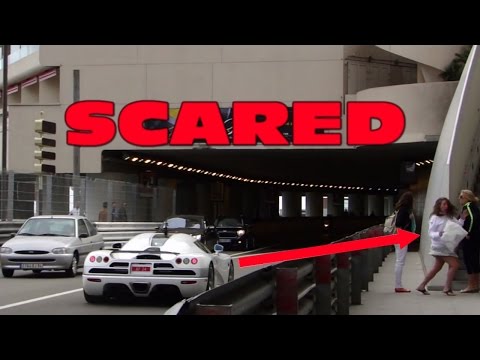