In 2010, the Swedish car manufacturer Koenigsegg unveiled the pre-production version of the Agera, and at the 2011 Geneva Motor Show, it finally came with the production model, which sported the R letter behind it.

Christian von Koenigsegg was not a regular car company CEO. He was not involved in the overall vehicle production. Still, he assisted his team when they designed the car's details. Thus, the final product was a true-to-the-bone hypercar meant to slam the door in front of other prestigious supercar makers.

The Agera R was a genuinely intimidating vehicle with a design that was clearly utterly different than any other supercar. With its short nose and the fighter-jet-inspired greenhouse, with a panoramic windshield visually continued by the side windows, the Agera R was in a class of its own. In addition, the twin-bubble top was extended toward the back of the car, on the sides of the engine compartment, while at the back, a self-adjustable wing ensured the necessary downforce for the car.

Despite the unusual exterior look, the interior was fitted with a luxurious interior. Its sports seats fitted with contrast stitching and the abundance of genuine carbon-fiber trims on the dashboard, center stack, center console, and door cards created a unique environment. That interior was the one that let the driver know that it was a seven-figure price-tag vehicle.

Behind the cockpit, the Agera R featured a five-liter V8 based on a Ford engine. Thanks to its extensive modifications, it produced a maximum of 1,100 hp (1,115 PS), which propelled the car at insane speeds. 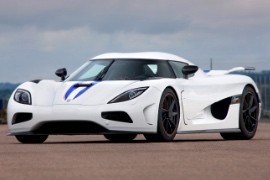