The Swedish car manufacturer Koenigsegg imagined a new generation of supercars when it designed the CCX, and the result was incredible for those times.

For any time, actually.

It was the tenth anniversary for the small car manufacturer, and Christian von Koenigsegg decided to ad an X (ten, in the Roman numbering system) to the CC letters, which stood for Competition Coupe. But it was more than a supercar; it was the beginning of the hypercar era, where the vehicles were hand-built piece by piece, and the result was famed with incredible performances and a mind-blowing price.

Koenigsegg built the CCX from carbon-fiber and designed the re-engineered Ford 4.7-liter engine to obtain an incredible power-to-weight ratio. Its aerodynamic profile led to a drag resistance of 0.32, which was needed to achieve some downforce on both axles. Later on, the car manufacturer added an optional wing on the back to increase the traction. Its doors featured a unique opening mechanism, which Koenigsegg designed since any other existing systems didn't fit into the car's profile.

Inside, the carmaker installed a leather-clad interior garnished with carbon-fiber trims on the steering wheel, dashboard, and air-vents. The carmaker installed an aluminum disc on the center console with buttons for various functions for the car. Koenigsegg closely worked with Recaro in developing light-weight, carbon-fiber shells upholstered in Alcantara and leather for the seats.


Under the hood, the 4.7-liter twin-turbocharged engine produced 806 hp and 970 Nm (679 lb-ft). It was paired as standard to a six-speed manual gearbox, and the car manufacturer offered a six-speed sequential gearbox. 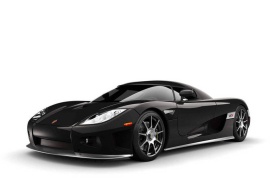