Koenigsegg introduced the Agera S in 2013 for specific markets where the particular E85 gasoline was not available.

While the regular vehicles might not feel a difference between an E85 fuel and regular unleaded gasoline, the high-performance sports cars were sensitive about that. Koenigsegg knew that, even in countries not specifically rich, there were potential customers. For them, the Swedish carmaker built the Agera S. The carmaker produced only five of them.

Its exterior design looked almost identical to the Agera R. Its active aerodynamic systems allowed it to provide 300 kg (661 lbs) of downforce at 300 kph (186 mph). It was a hypercar built to race most other supercars in the world. Unlike the Agera R, the S version sported the new Hollow Space Carbon Fiber Aircore wheels, reducing the suspended masses even more than its fierce racing Agera R sibling.

Like the R model, the S featured a removable roof, which the driver could have store under the front hood's lid. Inside the cockpit, the carmaker installed a carbon-fiber and Alcantara combination, leading to a luxurious yet sporty interior.

Under the hood, Koenigsegg installed the same 5.0-liter V-8 engine aided by two turbochargers. It offered over 1030 hp and ran on regular, 98 RON gasoline. Its sibling, the R, and the rest of its siblings could unleash their true potential only with E85 gasoline. But not the S. The S provided everything with regular fuel. 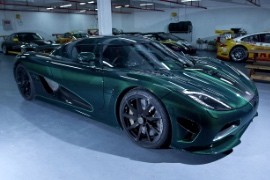