In 2004, when it was showcased at the Geneva Motor Show, the CCR stunned the world.

At the time of presenting the car, Christian von Koenigsegg claimed that the CCR is the fastest car in the world. He proved his word on February 28, 2005, when a Koenigsegg CCR broke the production road car speed record, with an official top speed of 387.87 km/h (241 mph) at Italy's Nardo Prototipo proving ground. It held that record until May 2005 when Bugatti Veyron raised the bar at 407.5 kph (254.2 mph).

Outside, the CCR looked similar to the CC8S, on which was based. It featured a new side air-intake design, a new headlight arrangement, and a revised rear end. A new front splitter was created to improve the downforce. It also kept the large scissors doors that open by rotating up and forward.

The interior featured leather, aluminum, and Alcantara, it had a minimalist design. On the center console, on a large round disc, were positioned most of the comfort buttons. It looked like an old telephone disc. Strangely, there was no infotainment system but only a CD-Player that looked like an aftermarket unit. The launching price was USD650,000 and only 14 were built.

Behind the cockpit was the engine compartment. It featured a Ford V8 unit of 4.7 liters with twin-superchargers that boost the power up to 806 hp and a huge 920 Nm (678 lb-ft) of torque. The power went to the rear wheels via a 6-speed manual gearbox. 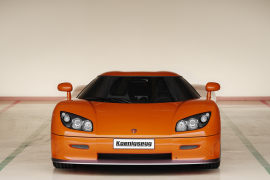