Always expect the unexpected. That is probably one of the most important pieces of advice for anyone going into the wonderful world of 1/8 or quarter-mile dragstrip racing.
20 photos

Then we can all take it slowly. At first with stock, factory cars racing the most popular nameplates out there – such as the C8 Chevy Corvette or any of the pony/muscle car hoots, both modern and historic. Afterwards, anyone can open Pandora’s box with help from the aftermarket realm. Only after that maybe people should start going into niches, such as the famous grudge racing sector.

Alas, if you initially check out the latest video (embedded below, uploaded on November 24th, just in time to be thankful for its existence) from the videographer behind the Drag Racing and Car Stuff channel on YouTube, you can throw all those sage thoughts down the drain. This is because there is an “awesome jet car performance,” or two, courtesy of the Ozark Raceway Park (Rogersville, MO) – and we are not going to tell anyone to refrain from such a cool show of blunt force.

Those who know a little about bonkers dragsters may have already seen the level of passion and the stratospheric kind of performance these vehicles are capable of. But even without prior knowledge, opening up to a video with a couple of modified cars looking like spaceships on the launch pad will probably make a lasting impression. And the race itself is of little importance, frankly.

Mostly because we are all awestruck at the sight of glorious jet burns that would make even a jet fighter jealous and throw an afterburner tantrum. Then there is also the general spitting of flames, the thundering audio show while lining up for the race start, as well as the quick disappearance into the night blur.

Unfortunately, there was no way of knowing the ETs and trap speeds (we saw the left jet car win the skirmish thanks to the track’s green light), though at least we got some fireworks at the end! 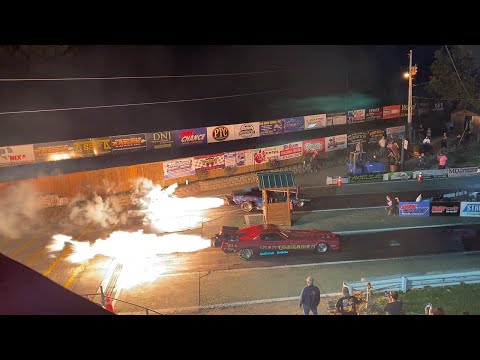