Is VW's Arteon the Cure to the Kia Stinger GT or an Unworthy Rival?

The Kia Stinger GT is undoubtedly something special, something for car people. It looks like a Porsche four-door coupe and comes with a twin-turbo V6 but doesn't cost Panamera money. But has it found a match in the Volkswagen Arteon?
1 photo
As Kia insisted on telling us when the Stinger came out a couple of years ago, this car represents great value. Yes, you could have a BMW 3 Series for the money, but it would have this cool look or the same level of equipment. Volkswagen may be German, but it's more of an underdog in America.

The construction and powertrain are totally different, but the Arteon is similar in several ways to the Stinger. For starters, it's intentionally cool, a four-door coupe with a liftback trunk. It too tries to give you more than BMW or Mercedes, plus it does a better job in the practicality department.

This review from Throttle House pits the Arteon R-Line against a Stinger GT, bost costing around $50,000. We've honestly been waiting a while to see these two matched up. The Kia looks cool, but many owners have complained about the gas mileage and especially the tires.

The Arteon has no hope of competing in the performance department since it's powered by a smaller engine and comes with a front-drive platform. More specifically, the 2.0 TSI makes 268 hp and 258 lb-ft ( 350 Nm), going through an 8-speed auto to the AWD system. Think of this as a luxurious Golf R. Meanwhile, the 3.3-liter twin-turbo Kia develops 365 hp and 376 lb-ft (510 Nm), so about a hundred more of each. Power goes primarily to the back wheels, making it more dynamic.

Volkswagen says it's working on an Arteon R, which will come out next year, presumably with a turbo VR6 or a 2.5 TFSI. However, there's no way it will be priced the same as this Kia, which thus becomes a bit of a value king. What would you prefer, a powerful Kia or a VW coupe? Let us know in the comments.

We almost forgot to mention the things that make the Arteon good. Rear legroom and comfort are fantastic while the dashboard is a little bit better built. We're not that impressed with it, especially since the analog clock looks so old-fashioned. But the screens are about as good as Audi's, it rides better than the Stinger and could be just the car to relax you. 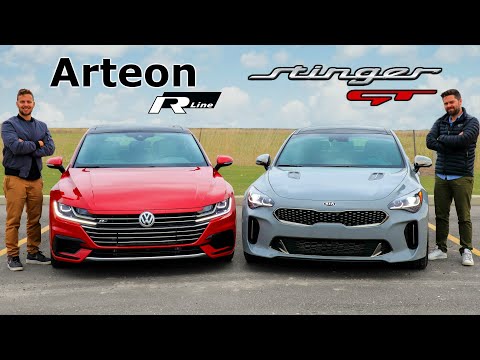