4 Scale Bentley Continental Goes From Land Yacht to Apocalypse-Ready 6x6, It Should Be Made

We've already seen a preview of the 2022 Hot Wheels Q Case recently, but now we get to see a complete unboxing of it. Naturally, not all cases will have a Super Treasure Hunt inside, but it's good to know that you should be on the lookout for the Spectraflame Green Camaro. As always, there are 72 items inside but we'll only look at the most interesting ones.

Right off the bat, the 1971 Ford Mustang Funny Car closes the Treasure Hunt Series for 2022. This is the sixth TH model this year that isn't a fantasy car, so we're grateful that Mattel ended this year's series like this.

Chances are that some of you haven't even found the '98 Subaru Impreza 22B STI or the 1958 Chevy Impala yet, but it's good to have an overview of the list every time you go out on a hunt.

If you didn't find the 1986 Toyota Van yet, you'll be happy to see this casting included in Case Q. We've seen some collectors purchase as many as 30 of it once it hit the shelves.

We could write a whole story about the Bone Shaker casting and we probably will do just that soon. This is the third color for it this year, and we're bound to receive more versions in 2023 as well.

Dodge Viper fans will be excited to see the SRT10 ACR in this case, even though the Hot Wheels Race livery might deter some people from buying one. Hearing the name "La Troca" might not ring a bell, even though this model has been around since 2001.

But once you'll see it you'll be able to tell that it's a lowrider version of a 1950 Chevrolet 3100. It was quite cool in Metalflake Gold earlier this year, and it's not half bad in Magenta either.

The 2006 Pontiac GTO was perhaps one of the most common models in stores lately, but the red and black color scheme wasn't as visually exciting as the new yellow and black one.

This vehicle always reminds us of that time Yasuyuki Kazama flew to the UK to teach Top Gear's Richard Hammond how to go sideways. Muscle Car enthusiasts have one more reason to be eager to find this case, as it contains a recolor of the 1965 Mustang 2+2 Fastback.

The Audi RS e-Tron GT has gotten rid of the boring Daytona Gray Metallic paint job in favor of a more vivid Tango Red. We're curious to see how many more "Green Speed" castings Mattel will be introducing next year, as the race for electrification is more intense than ever before.

At this point, we didn't expect to see another brand new casting. But the Hot Wheels Exotics line-up has now added the Aston Martin Vantage GTE in Lime Essence.

These types of items are always successful with collectors, and we're curious to see if we're going to get a Premium version of this casting in 2023.

The LB-Silhouette Works GT Nissan 35GT-RR in white and black is also featured in Case Q, as this could easily be one of the Top 10 castings of 2022. Even though the 1932 Ford featured here is not a Super Treasure Hunt, the Gulf livery is bound to be a hit with collectors around the world.

The Mod Rod has been around since 2019, and earlier this year we saw it with "Broken Promises" decals on the sides. It doesn't look half bad in Seafoam Green. And it might help you overlook the fact that there is no V8 under the hood.

After a three-year hiatus, the 1940 Ford Pickup seems to be back in full effect. In the space of a few months Mattel has launched two variations of this casting: first in blue and now in red.

Speaking of blue, we weren't expecting to see the 1971 Lamborghini Miura SV back with a new color so soon. This was also a Super Treasure Hunt a few months back, and you can't say no to one of the first supercars ever built.

Just when you thought there are no more surprises left, along comes the Chevelle SS Express. This casting hasn't been a thing for Mattel since 2013 when it was finished in Spectrafrost Copper. You can get one of those for as low as $11 on eBay. 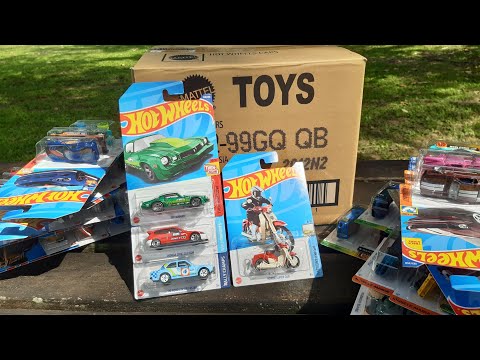