3 Scale Bentley Continental Goes From Land Yacht to Apocalypse-Ready 6x6, It Should Be Made

Believe it or not, the final Hot Wheels mainline case for the 2022 series is coming right up. That's right, we are close to getting our hands on case Q, which is the 15th and last one for the current model year. The following sneak peek reveals some of the castings to come, but it will probably take about two months before they hit the stores.

With case Q just around the corner, we now know for sure that the last Hot Wheels Super Treasure Hunt item for the 2022 series is the 1981 Chevrolet Camaro.

In this video, we get to see the regular version of this casting right next to the rare one, and this will be a bit of a tough one to spot for beginner collectors. The first thing that sets these two apart is the set of Real Rider 5-spoke wheels. Of course, there's also the TH logo on the sides.

With this last STH for 2022, you can't help but notice the American heritage of most of these special items. A total of 8 STH models this year are representative of the USA including the 1955 Chevy Bel Air, the Dodge Van, the 1963 Studebaker Champ, the 2020 Corvette, the Custom 2018 Ford Mustang GT, the 1984 Ford Mustang SVO, and the 1932 Ford Hot Rod.

Meanwhile, only two Japanese cars made the list: the 1999 Honda Civic Type R EK9 and the Nissan Skyline H/T 2000GT-X. The remaining five cars all hailed from Europe: the 1973 BMW 3.0 CSL Race Car, the Volkswagen Kafer Racer, the 1971 Lamborghini Miura SV, and the 1994 Audi Avant RS2. Some collectors make it a priority to find all the STH cars every year, but for most people that is just a distant dream.

Some people go years in a row without finding a single STH, but there's a solution to that. Later on this year Mattel is probably going to launch another STH-exclusive set of vehicles for collectors, and you will probably be able to buy all 15 items for about $250. Of course, this is going to be a limited edition item so it might not be that easy to purchase it.

With this preview of case Q, we also get a glimpse of the last Treasure Hunt item for 2022: the 1971 Mustang Funny Car. This casting was designed by Larry Wood and was initially introduced in 2004.

Before it was retooled in 2019, it used to feature an opening body. But that's no longer the case for this mainline item, instead, you can find something similar by digging through the Premium HW models instead.

Up next, the 1972 Ford Gran Torino Sport has been around since 2011 and this is also not the first time we get to see it with an orange paint job.

Mattel was quick to release a recolor of the Honda Civic Custom drag car, which was introduced earlier this year. This is probably a matter of personal preference, but this casting looked better in Sky Blue than it does in Cherry Red.

We are more excited about Matt and Debbie Hay's 1988 Pro Street Thunderbird. This is a brand new casting for Hot Wheels, and it required 16 months of work in total.

It's always cool to see a scale replica of an iconic vehicle! And the same goes for the 1984 Audi Sport Quattro. Even though this casting was released in 2019, we are now looking at its eighth iteration! And it's bound to sell like hot cakes just like it did before.

We've already seen a preview of the Lotus Emira before, and we aren't even going to talk about the poor choice of wheels for it. But collectors are going to be ecstatic about the release of the Jet Black Porsche 911 GT3.

It was good enough in Shark Blue, but the all-black murdered-out look on the new one is so much better. The remaining items shown in this video are all recolor versions of existing castings, and blue tones seem to be quite popular for case Q. 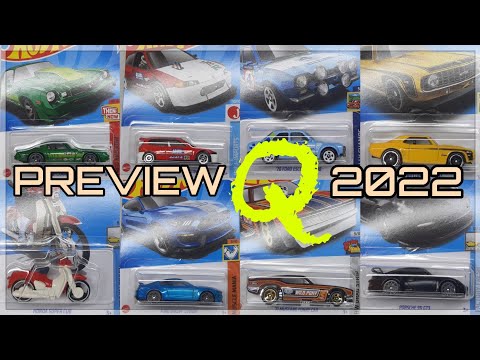