2 Genesis GV60 Launches in the U.S. With Features That You Probably Love Your Smartphone For

If You Needed a Crystal Ball To Predict the Right Gear Changes, Genesis GV60 Has One

Genesis, the luxury arm of Hyundai, has replaced the gear selector inside its GV60 crossover with a revolving Crystal Sphere that can double as an ambient lighting projector. Just don’t expect it to predict the future.
20 photos

The Korean car companies have long been derided as copy-cats. Their cars were only praised for offering precisely what traditional brands had but at a lower price. Those times are gone, and Korean brands can afford to ask for more money for their vehicles. Customers are willing to pay because they are genuinely good and, in many ways, innovative. Just look at the new electric cars sold under the Hyundai, Kia, and Genesis brands.

When the latter launched the GV60 electric crossover a year ago, the new revolving gear selector dubbed Crystal Sphere was the talk of the town. Not the E-GMP dedicated electric platform, not the nuts and bolts it shared with its sister models, the Hyundai Ioniq 5 and Kia EV6. Now, Genesis has shared more information about the signature feature that is supposed to revolutionize luxury car design and is offered standard on all GV60 trims.

We can say for sure that the Crustal Sphere is striking, and Genesis describes it as a “sparkling, jewel-like object” on the floating center console of the Genesis GV60. If it looks like a high-tech crystal ball, it was intentional. But don’t expect it to predict the future, although gear changes are a different matter. The Crystal Sphere comes to life when you open the GV60’s door, as part of the ambient cabin lighting. After that, it becomes a novel way to interact with the vehicle.

Push the start button, and it will revolve, revealing a more down-to-earth shift-by-wire selector and a prominent Park button on top. The crystal ball might be bad at making predictions, but it’s good at confirming selections via a haptic feedback system.

Genesis claims that the Crystal Sphere doubles as a safety device, clearly indicating when the car is ready to drive. This is less obvious for electric vehicles, which don’t have an engine running. Moreover, the ball cannot be rotated into the drive mode while charging and glows red when the reverse is selected.

We’re sure Genesis owners could become huge fans of the feature, especially as it looks tricky at first to put into Park. Hopefully, Genesis won’t be drawn into the same drama as Jeep, following the tragedy of Star Trek actor Anton Yelchin. 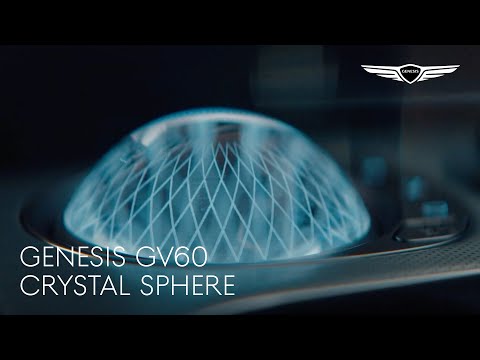