Hyundai introduced the G70 as a premium contender on the U.S. market and built it on the same platform as the Kia Stinger.

In 2021, the Korean carmaker unveiled a refreshed version of the G70 and added more features to the sport sedan. It competed in the mid-size sedan premium market, even though its brand name was not as famous as its competitors'.

Designed by the German Peter Schreyer, the G70 represented one of the most ambitious Hyundai projects. So when he re-worked the 2021 model, he enhanced the LED quad-signature thin lamps at the front. In addition, the vast, diamond-shaped grille sported a black color for the sport trim levels, creating a more aggressive look for the car. On the front fenders, behind the wheel arches, the carmaker added fake exhaust vents, but their plastic cover looked odd and resembled the B-shaped grilles from a Bentley. At the back, the oval-shaped tips over the quad exhausts looked similar to those installed by the British luxury car as well. The lower part of the rear bumper, on the other hand, looked unusual with its mat, unpainted plastic area.

Inside, Genesis worked hard to provide a luxurious yet sporty ambiance. The sport bucket seats at the front provided a high-bolstered area. At the same time, the tall center console featured an aluminum trim with the rotary dial for the infotainment system and the gear-selector. Its leather-clad interior provided a luxurious image, especially with the optional quilted pattern. A floating-design 10.25" touch-screen adorned the top of the center stack. Genesis installed two analog dials and two gauges in the instrument cluster for the driver, plus a color LCD between them.

Under the hood, the carmaker reduced the engine versions to just three: two turbocharged gasoline units and a turbo-diesel. Genesis offered the latter, especially for European customers. 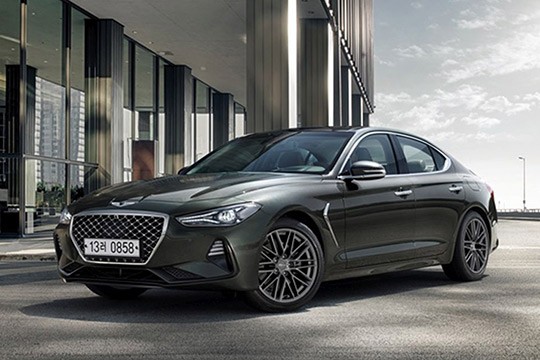