In a world where luxury sedans were offered by a well-established list of car manufacturers, a newly founded company unveiled the G90 to the public.

Well… not an entirely new company, as the Genesis was part of Hyundai before branching off.

While some might have been reticent to the idea of a luxury sedan produced by a non-European brand, the G90 offered luxurious features that other rivals would not have offered under $100,000.

Starting with the exterior design that made the G90 stand out in the crowd and continuing with a beautifully designed interior, the G90 checked almost all of the boxes of a customer looking for luxury.

The large sedan offered seating for give and was given with a choice of two engines: a V6 or a V8, with rear or all-wheel-drive.

The 3.3T Premium trim level came with a 3.3-liter V6 engine that cranked out 365 hp, while the 5.0 Ultimate top-of-the-range trim obviously offered a 5.0-liter engine that boaster 420 hp.

Both engines were mated with an 8-speed automatic transmission.

Even if the G90 was a large sedan, the storage space was not as you would have expected, as the main focus was the passengers’ comfort and interior elegance. 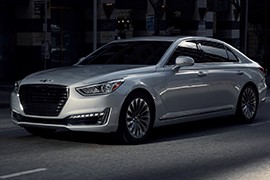