2 Activists Are Focusing on the Wrong Places to Protest, Using Wrong Methods as Well

3 Highway Protesters Get Owned by Angry Driver, See How He Tricked Them

5 I Deflate Tires on SUVs on My Way from Work, 62YO Mom Says: They Should Be Banned
Coverstory

Elena Gorgan
Look up the term “hypocrisy” in the dictionary today, and you just might be surprised to see a photo of David Beckham in there. We jest (but only a little).
8 photos

As promised last year, the second edition of The Earthshot Prize awards show, started by the Prince and Princess of Wales William and Kate, went international. The event went down at the MGM Hall in Boston, U.S., with attendees flying in from all over the world.

Most celebrity guests were from the United States, like actresses Catherine O’Hara and Shailene Woodley. Others, like founders Prince William and Princess Kate, flew in from the UK, while football legend David Beckham had to do the most traveling, arriving into Boston by private jet all the way from Qatar.

As you may have heard, Becks is the ambassador for FIFA’s World Cup 2022, a role he’s taken despite the ongoing controversy over human rights issues in Qatar, working conditions and the carbon footprint of the event itself. He never addressed the criticism directly, but you could say he must’ve been motivated by a reported £10 million ($12.3 million, at the current exchange rate) paycheck.

Becks left Qatar by private jet, landed in Boston where he got a full police escort, and attended the awards show, where he was listed as a presenter. He then probably hopped back on his private jet and returned to Qatar.

That would be standard practice in the life of an A-lister, but The Earthshot Prize is “the world’s largest environmental awards show,” one that celebrates and honors people and companies working towards a greener future. It’s an awards show that, by its mere existence, is meant to ring the alarm on the need to do something today, so we can still have a planet tomorrow.

The Earthshot Prize also boasts of being the awards show with the smallest carbon footprint, though no numbers in that sense were made public on either edition.

On the other hand, much has been said about how attendees arrive in electric cars, wearing pre-loved designer clothes (which is just a fancy way of saying they’re wearing a dress or a tuxedo they’ve worn before), and how the food served is locally sourced. Much has also been said about how guests are encouraged to zoom in instead of attending in person, to cut down the carbon emissions that would be generated by traveling longer distances.

This year, the guests who had to zoom in were the nominees and the winners themselves: non-profits, companies and people from all over the world whose work actually does make an impact in terms of sustainability and climate change. In return, A-listers who were mere presenters attended in person, including Golden Balls himself.

No wonder then that so many people are taking to social media to point out that this is textbook hypocrisy. An awards show that honors efforts in sustainability and claims to raise the alarm on climate change chooses to keep the same people it should be honoring at home and, instead, flies celebrities in.

David Beckham, out of all, is singled out because of his involvement with the World Cup 2022, the sporting event with the current largest carbon footprint, a high toll of human rights and work violations in the months leading up to it, hosted in a state country where the same human rights are just an empty phrase to say whenever it feels convenient.

This is comparable to longtime environmental activist Leonardo DiCaprio flying by helicopter for five minutes to attend a party he could’ve walked to (which he did once), or chartering a megayacht to sail around the world on an endless summer vacation with his boys (which he does every year). It is unnecessary and stupid, and draws attention to the larger issue: The Earthshot Prize ceremony wants to be like the Super Bowl of environmental awards but it’s just the Fyre Festival of ego-tripping royals, eager to come across as modern, if not outright woke.

Sadly, in the end, it’s just another case of the rich being their obnoxious, out-of-touch selves, doing their best performative activism. 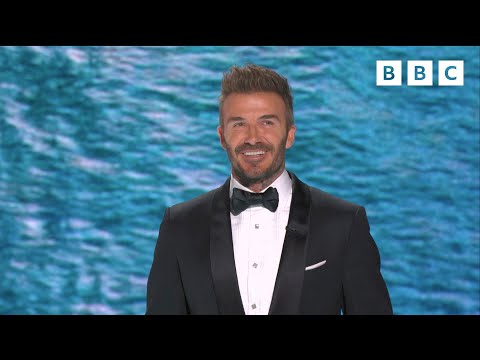 Thank you to everyone who made #EarthshotBoston2022 so spectacular ????

Don’t worry if you missed out, find out to watchhttps://t.co/IQqBCchZ2r pic.twitter.com/Pl5Wy2dNOc


David Beckham. Currently ambassador for the least sustainable and wasteful sporting event in history in Qatar. Giving out the Earthshot award for solving wasteful issues? You’re having a laugh. #EarthShotPrize


What's David Beckham doing at the Earthshot Prize? Is he trying to get good PR for being an environmental campaigner now after doing the bidding for Qatar, ignoring its human rights record and getting paid millions? #Bbcnews

Editor's note: Photos in the gallery are of David Beckham and the Maserati Grecale.

Jay Leno's Show Got Cancelled, I Think We Are All Going to Regret ItSee all editorials